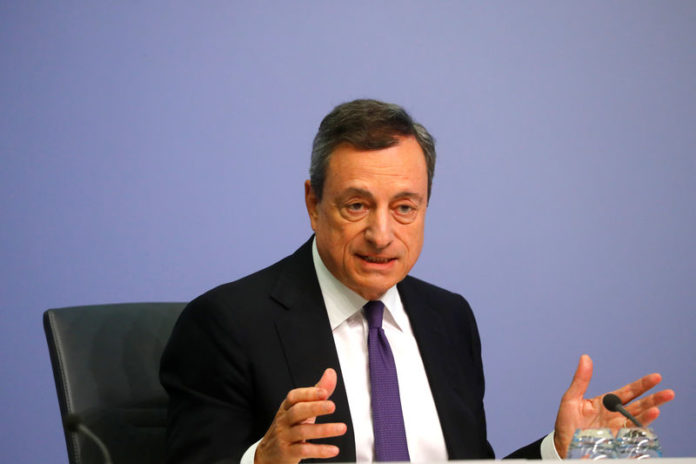 FRANKFURT (Reuters) – No viable argument remains for the European Central Bank to backtrack on its plan to end quantitative easing in December, even if euro zone growth fails to rebound after a dismal third quarter.

After four years and 2.6 trillion euros ($2.95 trillion) spent, the stimulus-generating scheme has run its course and more bond buying would do little other than exhaust the ECB’s already close-to-depleted policy arsenal.

Technical constraints are already biting and much of the euro zone’s economic pain is being inflicted by politics, an area the ECB wants to steer clear of.

Indeed, policymakers speaking on and off the record argue that the token caveat in the ECB’s guidance that would let them extend quantitative easing only covers genuine crises, not a slowdown.

ECB rate setters Ardo Hansson, Ewald Nowotny and Olli Rehn also weighed in, arguing that recent data fail to change their narrative that growth is merely slowing from an exceptional to a more normal rate – albeit weighed down by temporary one-offs.

Weak growth could still derail the ECB’s plans to raise interest rates sometime in the fourth quarter of 2019 but that decision is so far in the future, policymakers have yet to even start debating it.

For graphic on development in euro zone inflation click https://tmsnrt.rs/2P1e7rm

Even the ECB decided it wanted to extend the bond purchases, doing so would be close to impossible.

It can only buy up to a third of each country’s debt and in Germany, the bloc’s biggest economy, it is already close to this limit and, with Berlin running budget surpluses, German debt is shrinking fast.

While this one-third rule is self imposed, the ECB defended the asset purchases in a European Court challenge arguing that such limits ensure it would not exceed its mandate, which is keeping inflation at close to but below 2 percent.

So discarding the limit while inflation is rising – it hit 2.2 percent this month as volatile energy prices soared – would be likely to land the ECB back in court and in a difficult-to-defend position.

That is a high price to pay when there is no acute crisis.

Compensating with more bond buys from more indebted countries such as Italy would also breach its own rules, irritate Berlin – long opposed the stimulus measures – and put the ECB on the wrong side of a political debate as Rome argues with Brussels over a budget that flouts EU standards.

Indeed, policymakers speaking on condition of anonymity said there was agreement at last week’s policy meeting that Italy must be sent a strong signal that it would get no assistance from the ECB.

For graphic on asset purhcases by the ECB since 2015 click https://tmsnrt.rs/2P1orzl

For the central bank to change course on curbing stimulus, it needs evidence that economic slack is rising, weakening inflationary pressures.

That would only happen if growth settles well below the bloc’s potential, a hard to define figure but seen at around 1.5 percent. In the third quarter, annual expansion fell to 1.7 percent and slumped to just 0.2 percent quarter on quarter.

Given the lag in data, evidence of this would take months to come in. By then quantitative easing will be history and the ECB would be free to think of other measures to support the economy.

Serious Fraud Office presses case to get criminal charges reinstated against Barclays over 2008...

North American orders for semi-trucks surge in September By Reuters

Which Season 27 Team Will Be Eliminated In Week 7?