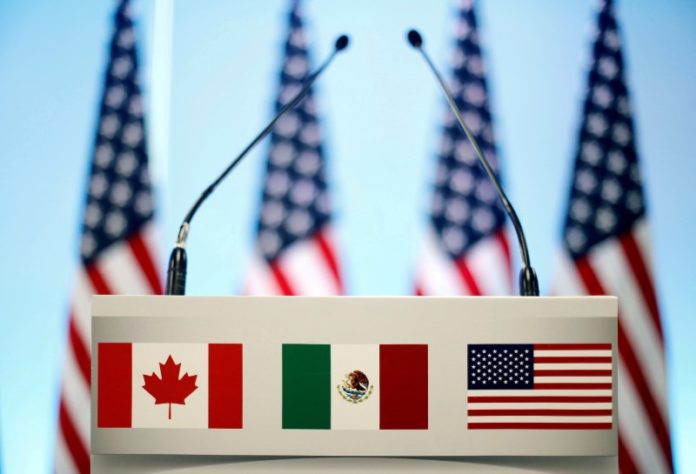 © Reuters. FILE PHOTO: The flags of Canada Mexico and the U.S. are seen on a lectern before a joint news conference of NAFTA talks in Mexico City

For thousands of U.S. firms, the change could add complications and uncertainty to doing business south of the border. Mexico is the third-largest U.S. trading partner.

The previous trade agreement, NAFTA, included provisions that gave U.S. firms operating in Mexico and Canada the option to challenge government decisions at an international tribunal.

A change in Mexican or Canadian regulations, for example, that had a material impact on a U.S. firm’s operations, could be challenged through an international panel instead of local courts.

The removal of the investment protection means firms would now be at the mercy of Mexico’s courts, which are notorious for corruption, an energy industry source said.

The provision has been part of numerous trade pacts to lessen risks for firms operating overseas. Its removal makes the new agreement an outlier, trade experts and industry sources in Washington said.

The administration of U.S. President Donald Trump took a negative view on the provision. U.S. Trade Representative (USTR) Robert Lighthizer sees it as a subsidy for U.S. companies to invest in Mexico.

A spokeswoman for USTR declined to comment for this story, referring to Lighthizer’s previous statements, which essentially said the old provision encouraged companies to move operations overseas at the cost of American jobs.

Trump blamed NAFTA for the loss of thousands of U.S. manufacturing jobs to Mexico, where labor is cheaper. He threatened to end the free trade deal until Mexico and Canada agreed to more favorable terms. A revised pact was signed last month.

A PHASE-OUT OF PROTECTIONS

The new deal, officially called the United States-Mexico-Canada Agreement (USMCA), will phase out much of the old investor-state dispute settlement (ISDS) protections over coming years.

Lighthizer had initially wanted to remove all such protections, but agreed to some carve outs after pressure from Mexico and U.S. industry groups, Mexican sources said.

Republican lawmakers in the United States, including Senator Orrin Hatch from Utah, also opposed Lighthizer’s attempts to cut ISDS from the deal. He led other lawmakers to press Lighthizer to keep NAFTA’s “robust investor protections” in a March letter.

A spokeswoman for Hatch said he is still reviewing the deal and working to ensure it “will build on NAFTA’s proven success”.

Under the new deal, the ISDS tribunal would only be an option for firms disputing a small number of issues, such as state expropriation of assets or discrimination against foreign entities.

A handful of industries retain broader protections under USMCA. They are oil and gas, telecommunications, power generation and infrastructure sectors that have contracts with the Mexican government.

But even those sectors face some uncertainty, industry sources said, because it is unclear if contracts with state-owned enterprises, such as oil company Petroleos Mexicanos (PEMEX) and state power utility Comision Federal Electricidad, would be covered.

“This is a major degradation of investor protections,” a business industry source in Washington said.

In 2009, agribusiness Cargill Inc () won $77 million from the arbitration tribunal over trade barriers the company said Mexico erected against high-fructose corn syrup from 2002 to 2007.

In 2015, Ottawa was forced to pay ExxonMobil Corp (N:) and Murphy Oil Corp (N:) $17 million in damages after the companies won a victory against a requirement to spend money on research and development.

“The change to ISDS is certainly deliberate and signals what USTR will pursue in the future,” said Inu Manak, a trade specialist at the Cato Institute, a conservative think tank in Washington.

USTR last week said it plans to open trade talks with the European Union, the United Kingdom and Japan.

“We’ll have to see how far they push it in the coming year as more negotiations begin,” Manak said.

Tesla critic Citron makes U-turn ahead of results By Reuters

Fed policy should be aimed at sustaining expansion: Clarida

Tesla Says It Has Not Received Subpoena On Model 3 Production