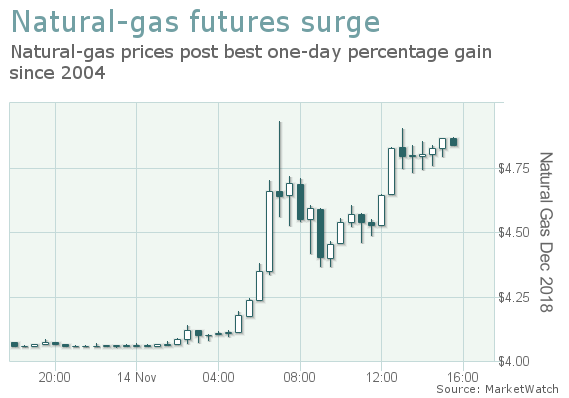 Natural-gas futures rocketed higher Wednesday, settling at their highest price since February 2014 and logging one of the best days in years, according to Dow Jones Market Data.

“The move higher in natural gas prices is mainly a result of a 15-year low in stockpiles combined with cold weather forecasts for large portion of the U.S. and record exports of natural gas,” said Will Rhind, chief executive officer at GraniteShares.

U.S. supplies of natural gas in storage stand about 16% below their five-year average as of the week ended Nov. 2, according to data from the Energy Information Administration, which will issue its latest updated supply figures Thursday morning.

Lenovo K9 with four cameras, Lenovo A5 with 4000mAh battery launched in India

Maharashtra: Due to rise in electricity demand, parts of state to face load-shedding this...