Home Banking More than half of global central banks are raising rates, and that’s... 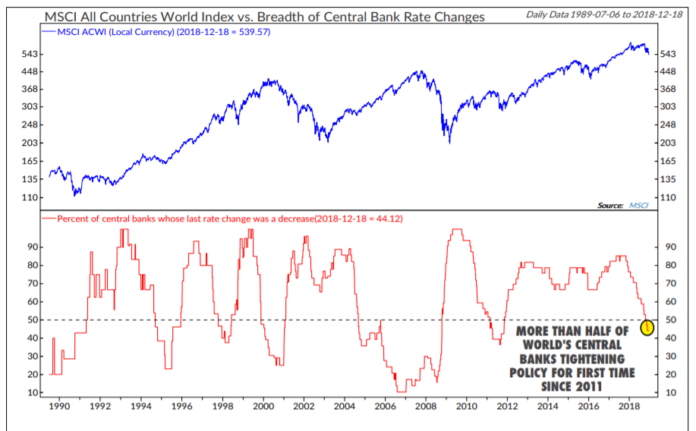 U.S. investors are increasingly concerned about Federal Reserve monetary policy, worried that the U.S. economy cannot handle the tighter financial conditions that the central bank’s recent interest- rate hike, its plans for future hikes and a policy of balance-sheet reduction will realize.

The Fed is often portrayed as going it alone in their policy of promoting higher interest rates, because both the Japanese and European central banks have kept short-term interest rates near zero.

But according to Alejandra Grindal, senior international economist with Ned Davis Research Group, this analysis unwisely ignores emerging market monetary policy, which has also been growing steadily tighter in recent months, to the point that 56% of central banks across the world are tightening policy.


have returned 7.9% per year, on average, during periods when less than half of global central banks were tightening. When more than half are doing so, as they are now, the average yearly return is negative 1.2%, according to Grindal.

This is not necessarily bad news for emerging-market stocks


themselves, which tend to outperform during tightening cycles, likely because they are coincident with a rising dollar and the top of the economic cycle for developed countries, which provide demand for exports.

Luckily for equity investors, global central bankers haven’t grown so hawkish that it will necessarily trigger a bear market for global stocks. “Severe bear markets in global equities, like those seen in 2008 and 2000, have been associated with around 75% of the world’s central banks in tightening mode,” she wrote. “Fortunately, there’s quite a bit to go before we get there.”

Retirement contribution limits will rise in 2019

European funds swoop on stocks amid sell-off By Reuters