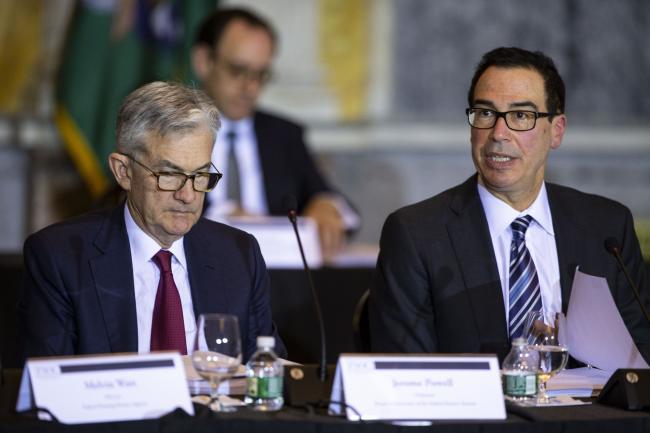 &copy Bloomberg. Steven Mnuchin, U.S. Treasury secretary, right, speaks while Jerome Powell, chairman of the U.S. Federal Reserve, listens during a Financial Stability Oversight Council (FSOC) meeting at the U.S. Treasury in Washington, D.C., U.S., on Wednesday, Dec. 19, 2018. When Mnuchin fingered high-frequency trading and the Volcker Rule as factors behind recent misery in the stock market he left out some other possibilities that might be contributing. Namely, the White Houses’s ongoing trade conflict with China and President Donald Trump’s threat last week to shut down the government. Photographer: Al Drago/Bloomberg

Mnuchin said in a pair of tweets Saturday evening that he’d spoken with the president about the matter, and quoted Trump saying he didn’t believe he had the authority to remove the central bank chief.

@realDonaldTrump and he said “I totally disagree with Fed policy. I think the increasing of interest rates and the shrinking of the Fed portfolio is an absolute terrible thing to do at this time,…

The White House had otherwise been silent for 18 hours since Bloomberg News reported the discussions.

“I never suggested firing Chairman Jay Powell, nor do I believe I have the right to do so,” Mnuchin quoted Trump as saying.

He also tweeted that that the president said, “I totally disagree with Fed policy. I think the increasing of interest rates and the shrinking of the Fed portfolio is an absolute terrible thing to do at this time, especially in light of my major trade negotiations which are ongoing.”

Trump has discussed firing Powell many times in the past few days as his frustration with the central banker intensified following Wednesday’s interest rate increase and intensifying stock market losses, according to four people familiar with the matter.

Bloomberg reported late Friday that advisers close to Trump aren’t convinced he would move against Powell, and are hoping the president’s anger will dissipate over the holidays. Some of Trump’s advisers have warned him that firing Powell would be disastrous.

“I’d be very careful about doing that,” the Alabama Republican said. “The independence of the Fed is the foundation of our banking system.”

Senator Pat Toomey, a Pennsylvania Republican, said Powell “has done nothing to warrant being dismissed.”

Sherrod Brown, the top Democrat on the Senate Banking Committee, said in a statement that “Given the Fed’s consensus on monetary policy, any effort to remove Powell would hit the trifecta: unlawful, ineffective, and damaging to the economy.”

Senator Mark Warner, a Virginia Democrat who also sits on the banking panel, urged Trump against trying to remove the Fed chief.

“What the President fails to understand is that monetary policy should be separate from politics,” Warner said in a statement. “Any action taken to dismantle the independence of the Fed would not only be inappropriate, it’s just another threat by this president against the institutions that protect our rule of law.”

Republican Representative Dennis Ross of Florida said many of his GOP colleagues are already disturbed by Defense Secretary James Mattis’s exit, and to now be worried about Powell only aggravates their concerns. “Whether it be defense or monetary policy, we want to see some stability,” he said.

Trump named Powell, 65, to head the U.S. central bank in late 2017, and he assumed office in February. In picking Powell, a former investment banker who’d been a member of the Fed board since 2012, Trump passed over for Janet Yellen for a second term.

Any attempt by Trump to push out Powell would have potentially devastating ripple effects across financial markets, undermining investors’ confidence in the central bank’s ability to shepherd the economy without political interference.

It would come as major U.S. stock indexes already down sharply for the year. The most recent trigger for selling has been the march to a partial federal shutdown that started on Saturday, tied to Trump’s hoped-for border wall with Mexico. The benchmark is down 9.6 percent for 2018 to date.

“Were he to try, markets would erupt,” said Nick Sargen, chief economist with Fort Washington Investment Advisors in Cincinnati, Ohio. “It would be construed as a loss of the Fed’s independence, and the dollar would sell off along with stocks.”

It’s unclear how much legal authority the president has to fire Powell. The Federal Reserve Act says governors may be “removed for cause by the President.” Since the chairman is also a governor, that presumably extends to him or her, but the rules around firing the leader are legally ambiguous, as Peter Conti-Brown of the University of Pennsylvania notes in his book on Fed independence.

Rudy Giuliani, Trump’s attorney, said in an interview the president hasn’t expressed to him an intent to move against Powell, but that if Trump were going to pursue that course of action he would go to the White House counsel, Pat Cipollone, for advice.

Giuliani said any decision on whether to remove Powell must take into account what the law allows, what impact such a move could have on markets, and the long-term value of having an independent central bank.

Trump’s dissatisfaction with Powell and the Fed, which he’s expressed numerous times in the past few months on Twitter and in interviews, appears to have boiled over after this week’s interest-rate hike, Powell’s press conference, and one of the worst single-week U.S. stock market losses in a decade.

Ahead of the central bank’s two-day meeting, Trump again attempted to jawbone the independent policymakers in a tweet that warned against “yet another mistake.”

The Fed defied the pressure, announced a widely anticipated rate hike after the meeting, and Powell signaled in his press conference that he’d be more cautious about tightening next year. But investors’ concerns over the chairman’s comments led to U.S. equities to record their steepest declines for any Federal Open Market Committee announcement day since 2011. Stocks have fallen on each “Fed Day” since Powell took the helm.