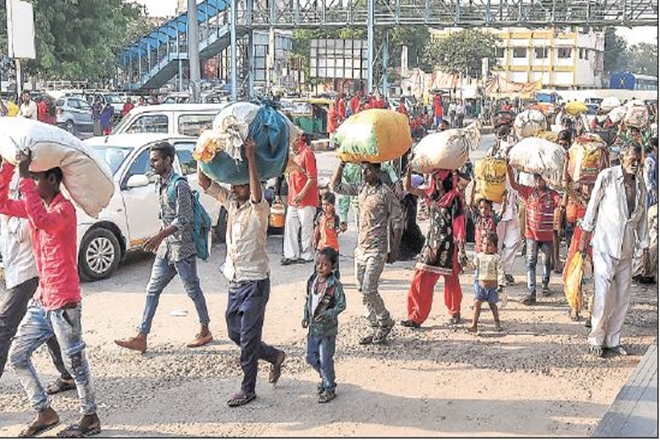 With migrant workers from Uttar Pradesh, Madhya Pradesh and Bihar fleeing Gujarat by the thousands fearing the wrath of locals, several industries in the state including auto, packaging and pharmaceuticals are facing the spectre of shutdowns on account of a sudden labour crunch.

What makes the situation worse is that businesses are likely to take a hit during the peak festival season when huge amounts of orders are pending completion.

Several cities of Gujarat are facing an exodus of migrant labourers triggered by attacks spearheaded by the Thakore community of the state following the brutal rape of a 14-month-old by a Bihari migrant last week.

It is estimated that over 10,000 workers have already left for their hometowns over the past few days, though unofficial reports suggest the figure may be significantly higher.

Concerned about the impact this could have on business and industry and on the image of the state, which is preparing for its mega biennial investors’ summit Vibrant Gujarat Global Summit slated for January next, the Gujarat government is trying to bring the situation under control.

Several industry associations under the Gujarat Chamber of Commerce and Industries (GCCI) have written to Gujarat chief minister Vijay Rupani and home minister Pradeepsinh Jadeja asking them to address the issue and protect the migrant workers.

“Gujarat is a manufacturing state and is a peaceful state. People from Bihar, UP, Odisha, West Bengal and Jharkhand have been working here for years. The festival period is coming shortly and at this time industries have a large number of domestic as well as exports orders to complete and such disruptions at this crucial time will cause a major dent to the momentum,” said Jaimin Vasa, president of GCCI.

On its part, the state government has announced that it will provide protection to the migrant workers. Police have lodged 42 complaints and arrested 342 attackers in Ahmedabad, Mehsana, Kadi and Vadodara districts.

CM Rupani on Monday said all those who attacked people from other states have been promptly arrested within hours. The government was swift in deploying 17 companies of State Reserve Police (SRP) in these industrial areas, including Sanand Industrial area.

Jadeja said it is the responsibility of the state government to provide security to those who come to Gujarat for employment from other states and appealed to those who have fled to come back to the state. “I also appeal to people not to be misled by those who are inciting people for their political gains,” Jadeja said.

The Sanand Industrial Association (SIA) on Monday claimed that nearly 4,000 workers have been moved to their home states just in the past one week from the Sanand industrial estate where auto majors like Tata Motors and Ford have factories.

SIA president Ajit Shah said, “There are about 15,000 migrant workers in Sanand GIDC and recently about 4,000 workers have left the state. If workers’ continue to leave in coming days, industries such has auto, packaging and pharmaceutical will be majorly impacted.”

Thakore community leader Alpesh Thakore had last week demanded justice for the rape survivor and called for giving preference to local people in jobs in industries in Gujarat.

India’s Central Bank and Government Are Set for a Monday Face...