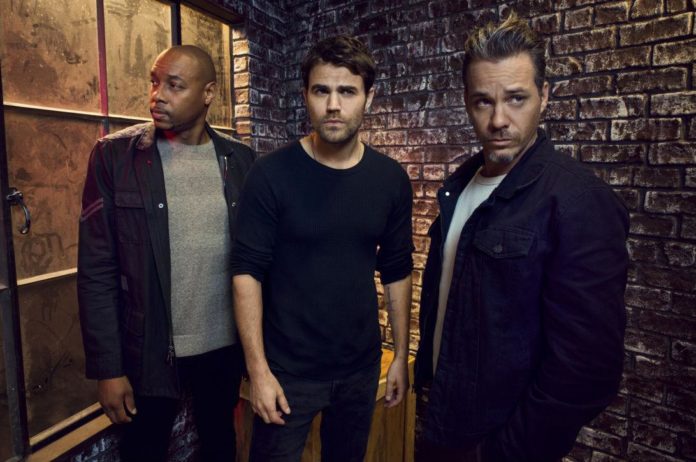 Halloween’s here, which means so is CBS All Access’ new series, “Tell Me a Story.” The streaming platform chose the spooky holiday as the perfect date to premiere the thriller, which is a dark reimagining of classic fairy tales.

Don’t worry, a bunch of familiar faces will be joining you for the creepy ride. Here’s how you know the “Tell Me a Story” cast:

Before joining the CBS All Access series, Wesley played Stefan Salvatore on The CW’s supernatural series, “The Vampire Diaries.” The show premiered in 2009 and didn’t end until just last year.

Dorian Missick as Sam; Paul Wesley as Eddie; Michael Raymond-James as Mitch of the CBS All Access series “Tell Me a Story.” Photo: James Dimmock/CBS

Although she’s been in a long list of projects, Cattrall is most well known for her role of Samantha Jones in the “Sex and the City” TV series and its two movies. Most recently, she was in the crime-thriller show, “Modus.”

It appears that Raymond-James is attracted to darker projects, as he was in the crime-mystery FX series, “Terriers,” in 2010, as well as HBO’s “True Blood.” Like co-star Dania Ramirez, he was also in “Once Upon a Time,” where he played Neal Cassidy.

In 2012, Missick joined TNT’s cop drama, “Southland,” as Detective Ruben Robinson. Starting that same year, he also was in SyFy’s “Haven.” Most recently, he was in “Zoe Ever After” with Brandy Norwood, “Animal Kingdom” and “Luke Cage.”

Billy Magnussen as Nick and Danielle Campbell as Kayla of the CBS All Access series “Tell Me a Story.” Photo: James Dimmock/CBS

Like Wesley, Campbell also joins this new show after being a part of a CW supernatural show. She starred as Davina on “The Originals,” which is part of the “TVD” universe. She’s also been in “Runaways,” “Famous in Love” and “All American.”

If you binged Netflix’s new original, “Maniac,” starring Jonah Hill and Emma Stone, then you’ve seen Magnussen before. His character, Jed Milgrim, was in seven of the 10 episodes. He also starred on the soap opera, “As the World Turns,” for a couple years as Casey Hughes.

Dania Ramirez as Hannah and Davi Santos as Gabe of the CBS All Access series “Tell Me a Story.” Photo: James Dimmock/CBS

This isn’t Ramirez’s first time on a fairytale-themed TV show. She played Jacinda/Cinderella on ABC’s “Once Upon a Time,” recently. Her other big TV show gigs included “Devious Maids,” “Entourage” and “Heroes.”

A couple years back, Santos starred as Ivan, the Gold Dino Charge Ranger, on “Power Rangers Dino Charge.” He was also in 2017’s “True Crime” edition of “Law & Order.”

This actor, on the other hand, has some big light-hearted TV roles under his belt. He played Matt Dowd on the fantasy-comedy “Eli Stone” and starred as Joel Graham on the drama “Parenthood” for six seasons.

She worked on “Gotham” as Sarah Essen from 2014 to 2015 and was also in Netflix’s “The Get Down.” Most recently, she’s been starring in the new NBC medical drama, “New Amsterdam.”

“Tell Me a Story” premieres on CBS All Access on Wednesday, with new episodes released weekly on Thursdays, starting on Nov. 8.

Trump says he does not believe economic warning in climate change report By Seeking...

The Food Industry Has Been Notoriously Hard To Organize. Could These Tactics Bring It...

The S&P 500’s correction proves bonds still hold their own as...

Boeing to hold airline call on 737 MAX systems after Indonesia...