Home Business Marico’s earnings outlook improving as copra price drops by as much as... 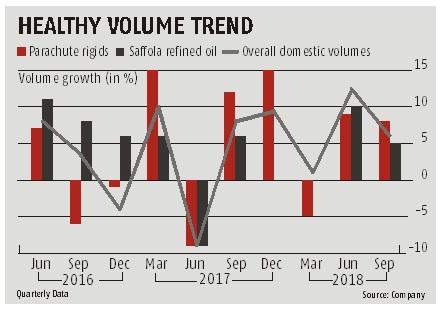 Marico Industries seems to have effectively dealt with teh inflationary pressure that is currently weighing on the earnings of other fast-moving consumer goods (FMCG) companies.


This is largely because the price of Marico’s key raw material, copra, is down by as much as 35 per cent from the January 2018 levels, and is helping fuel profitability and volumes of the company’s key hair oils portfolio, Parachute Rigids (coconut oil packs in blue bottles).


With copra prices ruling high in the past, the company had introduced price hikes in Parachute, which had impacted its volumes and margins in earlier quarters. But, with copra prices declining on a sequential basis, these operational parameters are improving, which is reflected in the September 2018 quarter (Q2) numbers.


Gross profit margin at 44 per cent in Q2, although down 293 basis points year-on-year, was up 171 basis points sequentially over the April-June quarter. Moreover, analyst at Emkay Global believe that lower copra prices should help Marico offset inflation in other input prices such as rice bran and packing materials amid high crude oil prices. With this, coupled with recent price hikes in Parachute, some analysts expect gross profit margin to improve in rest of FY19 and then by around 100 basis points in FY20.


In Q2, lower operating expenses (other than raw material costs) fell 60-76 basis points as a percentage of operating income on a year-on-year basis.


Consequently, earnings before interest, tax, depreciation and amortisation (EBITDA) margin of 16 per cent in Q2, though down 82 basis points year-on-year, was better than expectations. Overall, on a year-on-year basis, the company reported revenue growth of 20 per cent to Rs 18.4 billion and net profit increase of 18 per cent to Rs 2.2 billion, ahead of analysts’ expectations.


Street too celebrated the results, announced on Friday last week, with the Marico stock rising about five per cent in the past three trading sessions versus a just 0.5 per cent rise in the S&P BSE FMCG index.


Going ahead, with lower copra prices, Marico is estimated to witness 17-18 per cent EBITDA margin in FY19 rising to 18-19 per cent in FY20.


Vivek Karve, Marico’s chief financial officer, says, “Our medium-term guidance for EBITDA margin is 17-18 per cent at a consolidated level.”


Apart from profitability, Marico’s eight per cent volume growth in Parachute Rigid portfolio in Q2 provides further comfort. This was despite a strong 12 per cent increase in volumes registered in the year ago quarter. Analysts say, a part of the benefits from lower copra prices would be passed on to consumers, which would then push up Parachute’s volumes further.


Karve confirms: “As copra prices recede, we will pass on commensurate value to consumers to protect and grow the franchise. We’ll target to maintain a 5-7 per cent volume growth for our flagship brand, Parachute Rigids.”


In value-added hair oils, while a mere five per cent volume growth was impacted due to lower CSD (Canteen Stores Department, under defence ministry) offtake, analysts foresee a recovery in the coming quarters aided by improvement in Kerala sales (normalisation post floods) and CSD channel.


In Saffola, its edible oil business, too, Marico’s management is targeting volume growth in a high-single digit in the second half of FY19 and then in double digits in medium term.


Consequently, with the recovery in key portfolios, the company is expected to achieve its overall volume growth target of 8-10 per cent, as compared to just 3.5 per cent in FY18. This would also be aided by market expansion.


Some of the gains in input costs could also be invested in higher advertising spends. As per the management, investment towards brand building will be ramped up to support market growth initiatives in core categories, expansion into adjacent categories and a visibly strong innovation pipeline for the next 2-3 years. Also, Marico plans to scale up market penetration for its new product categories such as Advansed Aloe Vera Enriched Coconut Hair Oil.

The internet industry is suing California over its net neutrality law