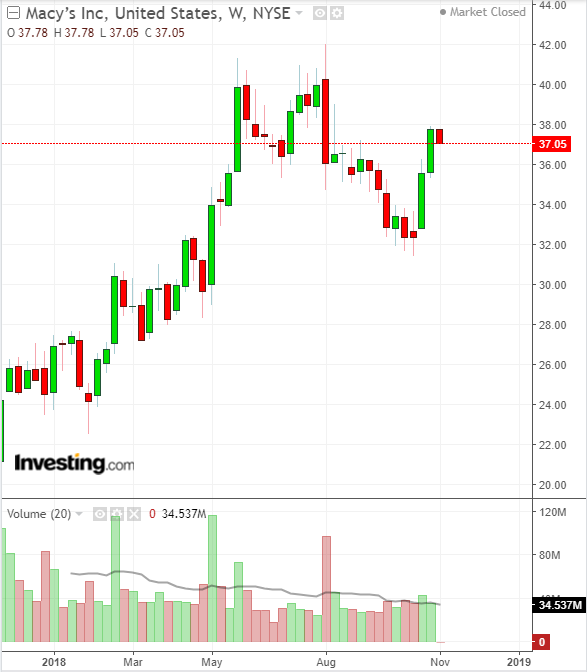 Macy’s (NYSE:) shares have been on a roller coaster ride since August. Even after the company beat expectations for , concerns that the department store’s turnaround is losing momentum continue to linger.

Perhaps the biggest worry—which briefly derailed the stock’s remarkable run over the past one year—was over rising costs. During its second quarter earnings report in August, Macy’s warned investors that gross margins are expected to decline in the second half of the year compared with the first half, on higher costs associated with the company’s new loyalty program.

Nevertheless, looking at the bigger picture, Macy’s is doing a lot of things right. And that’s helping the retailer bring back customers.

Macy’s has been spending to lift its digital presence, adding more local merchandise and refreshing in-store fixtures. That’s boosted online sales and proven to be a great success at building in-store traffic.

During the second quarter, Macy’s digital sales rose by 10%, for the 36th straight quarter. The retailer expects to exceed $1 billion in online sales this year. As well, currently, Macy’s is just one of two department store chains that let customers check prices on its app, track order histories, do visual product searches and also chat with customer representatives.

The strength of its e-commerce activity shows that the retailer is well positioned to defend its turf against much bigger rivals Amazon (NASDAQ:NASDAQ:), Walmart (NYSE:NYSE:) and Target (NYSE:NYSE:).

And to make its traditional department stores more attractive, Macy’s has been pushing its discount-focused Backstage concept, which offers an array of off-price items for bargain hunters. During the first half of the year, the retailer opened about 65 locations in existing department stores; it plans an additional 55 through December. Macy’s is also expanding its Bluemercury cosmetics chain which also offers spa treatments.

We believe CEO Jeff Gennette’s strategy to re-shape Macy’s bricks-and-mortar business and strengthen its e-commerce and mobile experience has created a powerful winning combination. Macy’s is now on track to see a solid business turnaround amid a fast changing retail environment.

This positive sentiment is reflected in the price of Macy’s shares, which closed on Monday at $37.05, up more than 90% from a low of $19.09, over the past one year. Investors who saw the value in Macy’s stock at its low have thus reaped gains double what e-commerce giant Amazon delivered over the same period.

Ahead of third quarter earnings, Macy’s has a lot of momentum, but it’s vulnerable to profit-taking after the stunning rally of the past year. In our view, any negative reaction to the stock should be viewed as a buying opportunity for long-term investors.

Aside from its positive momentum and smart turnaround strategy, Macy’s 4.2% dividend yield is still among the best in the retail space and a good hedge if share prices slide.

Where will global GDP growth come from in the next five...