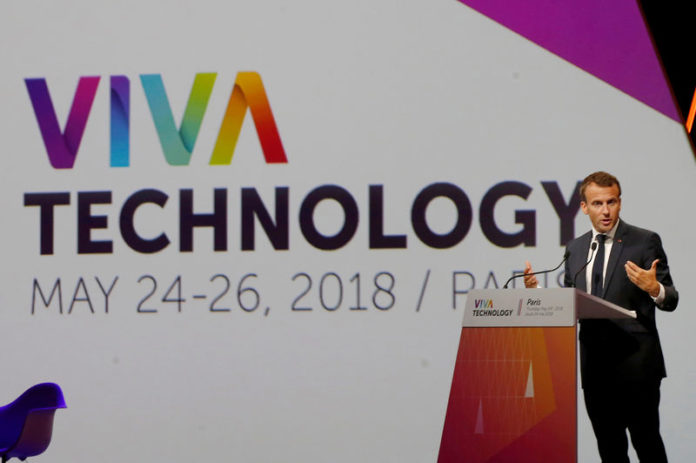 PARIS (Reuters) – French President Emmanuel Macron will urge a visiting group of top Silicon Valley venture capitalists this week to invest in the nation’s start-ups while calling on them not to “steal” the best creations, four sources told Reuters.

The discreet event, not mentioned in Macron’s official schedule, comes at a tough time for the French leader after rioters looted and ransacked boutiques and businesses in central Paris, chaotic images beamed around the world.

Executives from some of the biggest names in U.S. tech funding, including Andreessen Horowitz, Sequoia Capital and General Atlantic, are among the 40 expected in Paris on Wednesday and Thursday for a tour of the French startup scene.

The two-day roadshow includes presentations from what sources called tech ‘superstars’ already investing in France as well as visits to hubs such as the Station F tech incubator in eastern Paris.

But instead of simply urging them to invest in France, Macron, who is scheduled to host the investors at the Elysee palace on Thursday evening, will also tell the U.S. funds to help French businesses to flourish rather than pushing the best French entrepreneurs to move to the United States.

“Today, many French companies raise money in the U.S., and the usual reflex of U.S venture capitalists is to tell them: ‘come to the United States then’,” a source at Macron’s office told Reuters.

“We will tell them: it’s an ecosystem, your best interest is to do like in Britain and Israel: invest here and don’t move everything (to the U.S.),” the source said.

The event was scheduled before the nationwide protests that turned the French capital into a battle zone and the format of Macron’s appearance has yet to be finalised, sources said.

With his authority challenged by the “yellow vest” protesters, who sprawled anti-capitalist slogans on banks and luxury boutiques on Saturday, Macron has his work cut out to counter the damage done to France’s image.

The French tech scene has seen a boom in recent years, helped by Macron’s efforts to turn France into a “startup nation”, as a new generation of tech-savvy entrepreneurs less interested in government careers tap into the large pool of engineers that France’s top universities produce every year.

“We think the French ecosystem will outgrow the one in England in the coming years,” is one of the messages the U.S. investors will hear, the Elysee source said. Goldman Sachs (NYSE:) and private equity fund KKR are also among the attendees.

But French companies say the most promising startups need access to bigger funding rounds if they are to stay. Investments are not large enough to create “unicorns” worth more than $1 billion. So far this year, only two French firms have closed investment rounds of more than 100 million euros.

Investors on the two-day visit will tour Station F, a startup campus funded by telecoms billionaire Xavier Niel. They will meet entrepreneurs such as David Gurle, boss of U.S. encrypted messaging service Symphony, who moved its research center to a technology park in southeastern France.

Among other U.S. tech figures who have chosen to relocate to France and who will make pitches are Tony Fadell, a developer of Apple’s iPhone, and Ian Rogers, a former executive at its media player iTunes, now chief digital officer of luxury group LVMH.

Make buildings by recycling construction waste from other buildings