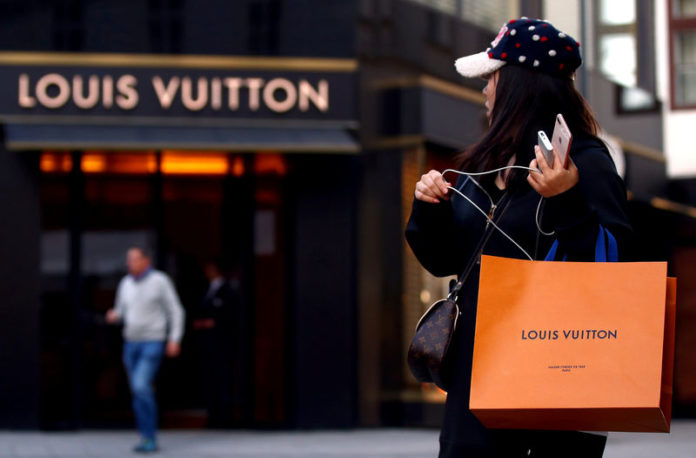 © Reuters. FILE PHOTO: Woman with a Louis Vuitton-branded shopping bag looks towards the entrance of a branch store by LVMH Moet Hennessy Louis Vuitton in Vienna

PARIS (Reuters) – Shares in LVMH (PA:) fell in early trading on Wednesday even as its all-important fashion and leather goods unit did better than expected in the third quarter, with the broader luxury sector also rattled by lingering fears of a Chinese slowdown.

Concerns over an ebbing in demand for branded goods among Chinese consumers have hit luxury stocks in recent days, as a trade war between Beijing and Washington simmers.

Falls in the yuan have also added to concerns that shoppers will lose purchasing power.

LVMH on Tuesday reported a 14 percent rise in comparable sales in its key handbags and fashion division, home to its Louis Vuitton and Christian Dior brands, beating forecasts, and overall revenues were in line with expectations.

But that was not enough to reassure investors, with LVMH shares down 4.7 percent by 0725 GMT.

“I think the market is in sell the news mode, anticipating a looming slowdown due to the trade war,” a trader in Geneva said.

Shares in Gucci-owner Kering (PA:) were falling just over 4 percent on Wednesday morning, with those in Britain’s Burberry (L:) down 2.7 percent and French handbag market Hermes (PA:) down around 3 percent.

SBI to recover dues worth over Rs 3,900 crore by selling 8 NPAs

India’s dominance in this sector faces competition from China; here’s what...