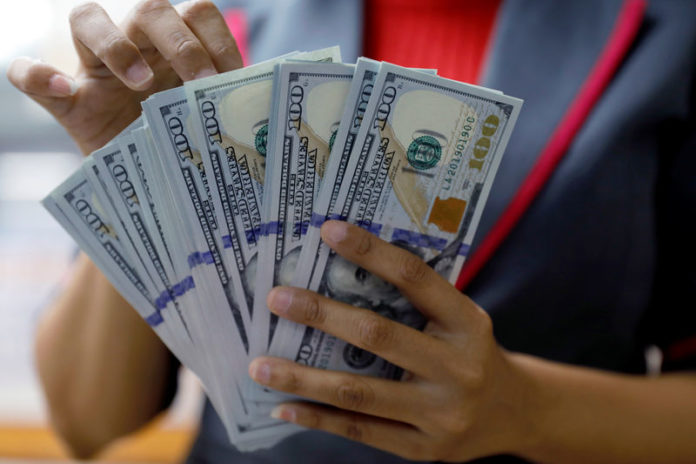 LONDON/NEW YORK (Reuters) – After an unexpected rally that carried the dollar to 18-month peaks and saw it end 2018 as investors’ top trade, the currency faces challenges in the coming year.

They include an expensive valuation, a flagging equity boom, waning cash repatriation by U.S. companies, and the possibility that the U.S. Federal Reserve will not raise interest rates as many times as signaled.

Hence the prediction in a Reuters poll this month that the dollar will end 2019 around 5 percent below current levels..

That flies in the face of the current trend, with futures showing dollar positioning near historical highs.

But the wheels have come off that investor bandwagon in recent years, as big bets have misfired on , tech and… the dollar, which markets had heavily bet against in late-2017.

(Graphics on ‘Most crowded trade’ – https://tmsnrt.rs/2R9NaSj)

“From a positioning perspective, the scope for the dollar to rally significantly is not there unless you see growth in the rest of the world really weakening and the United States continuing to be strong,” said Eugene Philalithis, portfolio manager at Fidelity International.

On the economic front, jobs and housing data suggest a decade-long U.S. recovery is losing traction and a flattening bond yield curve is flashing the classic recession warning.

While the Fed raised interest rates in December and signaled it would stay the course on policy tightening, money markets reckon otherwise.

(Graphics on ‘US yield spread and recession’ – https://tmsnrt.rs/2RuCkDH)

Then there is valuation.

Even before the dollar rally began in April, it was overvalued compared to historical averages against the currencies of trade partners and adjusted for inflation (REER). Now it is 12 percent more expensive than its 10-year average on that basis.

Other currencies including the British pound and some emerging heavyweights look significantly undervalued – the Turkish lira and Brazilian real by around 20 percent.

But if odds are stacked against the dollar, why have investors rushed to embrace it as 2018 ends?

It says the dollar strengthens as risk aversion grows – as is happening now – because investors rush for safe, liquid assets. It would then weaken as growth flags – the bottom of the smile – before rising again as the economy recovers.

But clouds are gathering over the broader economy too. This month’s BAML poll showed investors at their most pessimistic on global growth since the 2008 financial crisis.

Banking chiefs at HSBC and Standard Chartered pull out of Saudi...