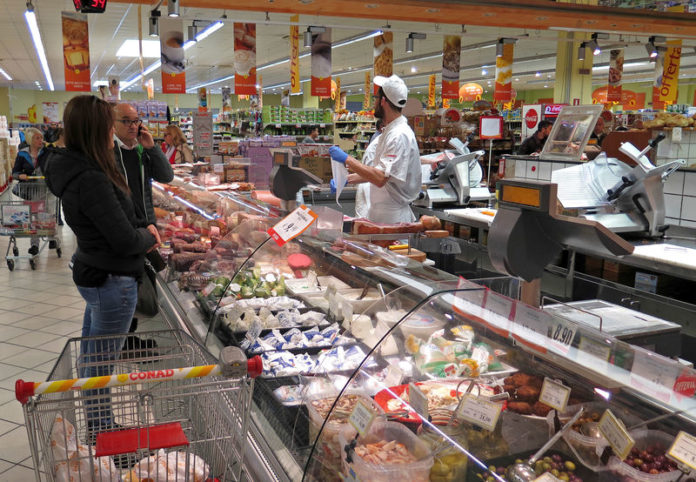 © Reuters. People are seen in a Conad grocery shop in Rome

On a year-on-year basis, third quarter growth was revised down to show 0.7 percent growth compared with an estimate of 0.8 percent made a month ago.

The 0.1 percent drop in GDP was the first contraction since the second quarter of 2014, ISTAT said.

In the third quarter, the economy was held back by weak domestic demand, with consumer spending falling 0.1 percent from the previous quarter and investments declining by 1.1 percent.

The third quarter contraction continues a steady slowdown in Italian growth over the last 18 months.

Second quarter growth was unrevised at 0.2 percent on the quarter and 1.2 percent year-on-year.

Last month the government, which took office in June, cut the full-year 2018 GDP growth forecast to 1.2 percent from a 1.5 percent projection made in April by the previous administration.

After the third quarter data, achieving even the revised target would need an extremely strong acceleration at the end of the year.

ISTAT said so-called “acquired growth” at the end of the third quarter stood at 0.9 percent, meaning that if there is no quarterly growth in the final quarter, full year 2018 expansion come in at 0.9 percent over the previous year.

The new coalition of the anti-establishment 5-Star Movement and the right-wing League has presented a big-spending 2019 budget it says is needed to prevent Italy’s chronically sluggish economy slipping into another recession.

However the budget, which targets the deficit to rise to 2.4 percent of GDP in 2019 from 1.8 percent this year, has been rejected by the European Commission, which wants deficit cuts from highly-indebted Italy, rather than fiscal expansion.

Negotiations between the government and the Commission are ongoing but the two sides still seem far apart.

ISTAT gave the following details on contributions to quarterly growth in the second and third quarters of this year.

Nissan warns over loss of ‘frictionless’ trade after Brexit

Verizon and AT&T Could Rally After Earnings