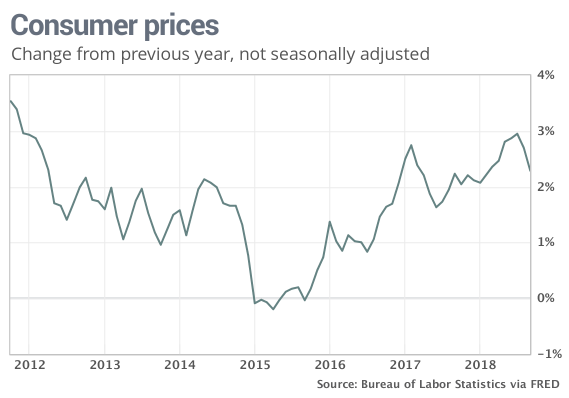 The Federal Reserve is raising U.S. interest rates — and giving stock investors a heartburn — to head off a threat to the economy from rising inflation. But what if inflation has already peaked?

After surging to a six-year high in July, inflation has leveled off in the past few months. The consumer price index, for example, shows the yearly increase in the cost of living has slowed to 2.3% from a recent peak of 2.9%.

The Fed’s preferred PCE price barometer, meanwhile, softened slightly to an annual rate of 2.2% in August from 2.3%. And the core rate that strips out food and energy has been stuck at or below the central bank’s 2% target for six months.

The relaxation in price pressures has led some economists to wonder if the Fed will reconsider how many times it will raise interest rates in 2019.

“This is the sort of data that should get the Fed to skip a rate hike next year,” wrote Neil Dutta, the head of economics at Renaissance Macro Research, in an article titled “Implications of Soft Inflation.”

For now it’s probably not in the cards.

The central bank will undoubtedly raise rates once more in 2018 and it’s signaled plans to lift interest rates three times in 2019. Investors fretting about those rate hikes is partly what caused a big plunge last week in the Dow Jones Industrial Average

Perhaps, as some economists contend, the respite in price pressures will be short-lived. The flames of inflation will soon lick higher again owing to strong economic growth and the tightest labor market in decades, keeping the Fed on its current path.

Read: Forget the Wall Street carnage: To read the economy, look at how much Americans are eating out

He points out the pace of consumer inflation actually started to slow about six months ago. More recently a stronger dollar has put further downward pressure on inflation by making foreign goods cheaper for Americans to buy. And surveys of consumers indicate they don’t expect inflation to increase much over the next five to 10 years.

None of that is going to stop the Fed from raising rates in December, of course. But if inflation doesn’t rise any further, the central bank is sure to reevaluate its strategy for the long run.

Opinion: Powell has lost his North Star, and the Fed is flying blind

For one thing, he contends, the price of most consumer goods and services are “quite slow” to change.

Productivity refers to the ability of workers to use new tools, techniques, technology or their own work experience to produce more goods and services in the same amount of time. When productivity rises companies can pay workers more without adding to inflation.

Read: U.S. retail sales are soft for the second month in a row despite strong economy

Even after its recent runup, the rate of inflation is still quite low by historical standards. To Dutta that means the economy can probably grow faster than 2% a year and even cope with an unemployment rate below 4% without sharply stoking inflation.

“We see limited evidence that underlying inflation is picking up much in the coming year or two,” Dutta concluded.

Gab.com back up after week offline following Pittsburgh shooting By Reuters

Iran oil waivers: How India, China are lining up after US exemptions

Regulator cautions banks to prepare for Brexit amid uncertainty By Reuters