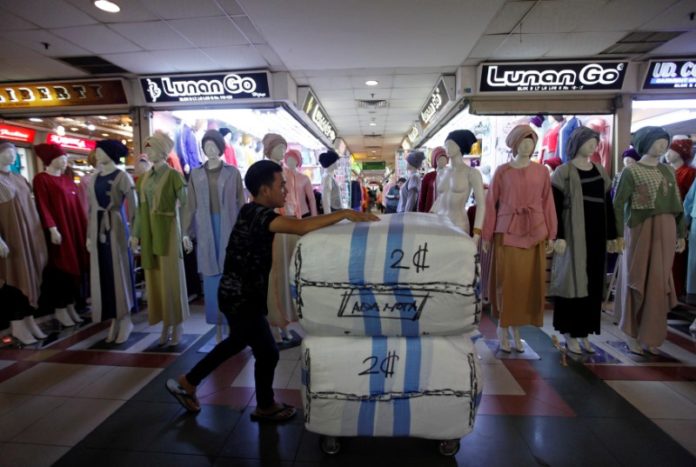 © Reuters. FILE PHOTO: A labourer pushes sacks of clothes and material through a market in Jakarta, Indonesia

JAKARTA (Reuters) – Indonesia’s annual inflation rate is expected to ease in December and remain in the central bank’s target range, a Reuters poll showed on Friday.

A Reuters poll of ten analysts forecasts annual inflation at 2.98 percent in December, easing from 3.23 percent in November.

December’s inflationary pressures stem from transportation and food items amid higher demand during the Christmas and New Year holiday period. The increase, however, is somewhat slower when compared with a year earlier, said Satria Sambijantoro, an economist at Bahana Sekuritas.

Economists have noted the government’s fruitful efforts to control inflation, which this year paired up with aggressive rate hikes from Indonesia’s central bank.

At the central bank’s policy review in December, the board of governors had forecast the annual inflation at end of 2018 to be below 3.2 percent.

The core inflation rate, which excludes government-controlled and volatile prices, is expected to be slightly higher at 3.07 percent, compared with 3.03 percent in November.

Explained: Loan write-off is not the same as loan waiver; what you should know

Belgium stocks lower at close of trade; BEL 20 down 0.29% By Investing.com

Airtel Africa to raise $1.25 billion from SoftBank, five others