Home Finance In the NFL, this team offers the best ROI for fans 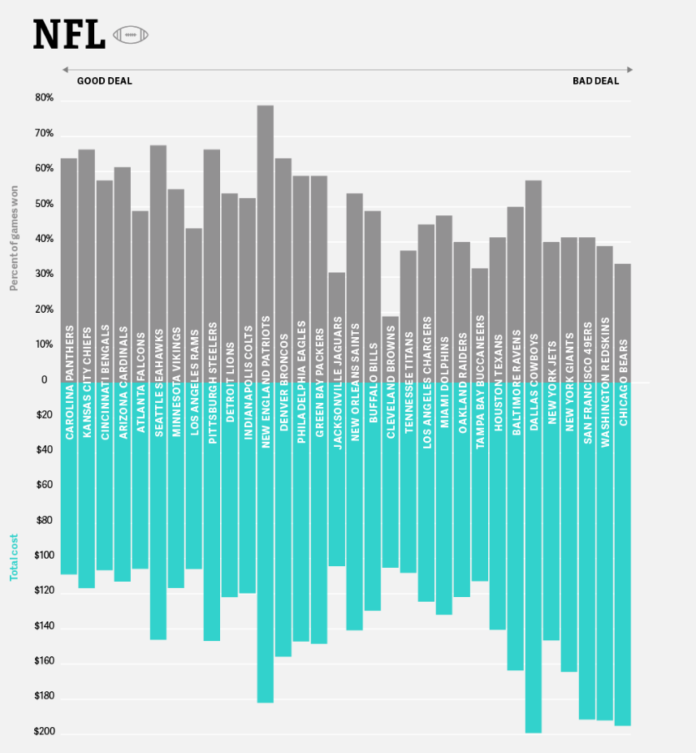 Anyone who’s attended a professional sports event in the past few years knows how expensive it can be. Is the price a little more worth it if your team wins? Recent research takes a look at which NFL fans get the most for their money.

The best deal goes to Carolina Panthers fans, who not only get to watch games in a warmer climate, but they spend the least per team win. At the other end of the spectrum, Chicago Bears fans freeze their butts off at most home games, and pay the most per win.

The research was conducted by the Data Science group at Berkeley’s School of Information. It considered the cost of a game to be: one ticket, stadium parking, one hot dog and one beer — so if you go to a game with someone else, and drink more than one beer, these are modest estimates. The win percentage covers the past five regular seasons.

As bleak as the numbers look for some of these teams, the NFL generally offers the best ROI for fans, compared with other leagues: The underdog wins about a third of the time, says Amit Bhattacharyya, a Data Science professor at Berkeley.

“Even if your team is horrible, there’s a pretty good chance of winning and it’s not as close to zero as you might think,” he said.

Check for your favorite team below.

Investors caught in crossfire of fight for holiday shoppers By Reuters

Fed’s Evans sees a pause after lifting rates to around 3...