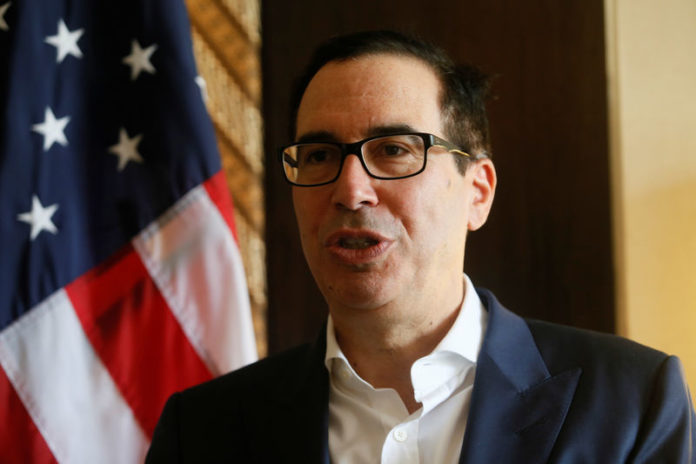 By David Lawder and Leika Kihara

The agreement came as U.S. Treasury Secretary Steve Mnuchin reiterated his concern over the yuan’s weakening against the dollar – a drop that Washington suspects may be aimed at giving Chinese exports a trade advantage and offsetting U.S. tariffs.

In a communique issued by the IMF’s steering committee, the member countries also agreed to debate ways to improve the World Trade Organization so it can better address trade disputes.

“We acknowledge that free, fair, and mutually beneficial goods and services trade and investment are key engines for growth and job creation,” the International Monetary and Financial Committee (IMFC) said in the statement.

“We will refrain from competitive devaluations and will not target our exchange rates for competitive purposes,” it added.

Fears that escalating global trade tensions and rising U.S. interest rates could dent growth have roiled global markets in recent days and prompted warnings of heightened risks by finance leaders gathering for the IMF and World Bank annual meetings in the Indonesian resort island of Bali.

“The recovery is increasingly uneven, and some previously identified risks have partially materialized,” the communique said, referring to threatened tariffs.

The United States and China have slapped tit-for-tat tariffs on hundreds of billions of dollars of each other’s goods over the past few months, sparked by U.S. President Donald Trump’s demands for sweeping changes to China’s intellectual property, industrial subsidy and trade policies.

The bilateral tensions have flared over to currencies with the United States voicing concern about a weakening of the yuan to close to 7 to the dollar in recent months, a level not seen in a decade.

Trump has frequently accused China of cheapening its currency to gain a trade advantage, claims Beijing has consistently rejected.

Mnuchin on Saturday said Chinese officials told him at the Bali meetings this week that a further depreciation of China’s yuan currency was not in the country’s interests.

“And as I’ve said, the currency issue is an important issue for us in trade and will be part of our trade discussions,” he told a news conference. “We want to make sure that depreciation is not being used for competitive purposes in trade.”

The comments come after Mnuchin expressed concern about the yuan slide, as the Treasury prepares to release a much-anticipated report next week on currency manipulation.

Mnuchin also said he was “not losing any sleep” over the prospect that China could sell U.S. Treasury debt amid rising trade tension between the world’s two largest economies.

Mnuchin said no decision had been made on whether Trump would meet Chinese President Xi Jinping at the G20 leaders summit in Argentina at the end of November. No formal talks to try to resolve the trade dispute have taken place since Aug. 23.

Wall Street bonuses will be even bigger this year, but 2019 looks less rosy

Indonesia stocks lower at close of trade; IDX Composite Index down 0.13% By Investing.com