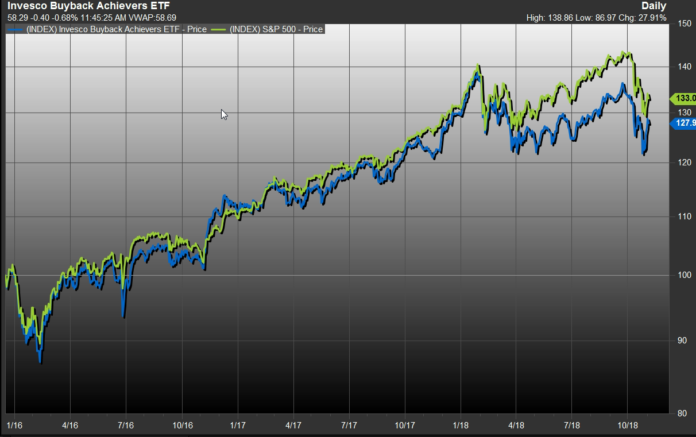 After a tumultuous October, investors are regaining their footing and counting on a safety net for stock values that may prove treacherous.

One reason for renewed confidence has been that leading up to earnings releases, public companies face greater restrictions to buying back their own shares, a phenomenon known as a “buyback blackout period.”


dropped 5.1% in its biggest monthly percentage fall since January 2016, while the tech-heavy Nasdaq Composite Index


was the worst-performing major benchmark, dropping 9.2% for the biggest monthly fall since November 2008.

As of the end of Thursday, roughly 73% of S&P 500 companies have reported earnings, according to FactSet. And like clockwork, the buyback announcements have begun, with companies ranging from Estée Lauder Companies EL


declaring large buyback initiatives. Many analysts are counting on the return of such programs to re-energize stocks, now that earnings season is winding down.

But if you’re betting on such repurchases to power the stock market beyond its recent peaks, think again, says Vincent Deluard, global market strategist at INTL FCSTone. In an interview with MarketWatch, Deluard said constituents of the S&P 500 index


are on track to buyback 30% less in stock than they did in the second quarter, and he predicts the rate will continue to slow from here.

That means the much heralded predictions that there will be $1 trillion in stock buybacks this year “won’t even come close” to being realized, Deluard estimates.

There is a simple reason for this slowdown to continue: rising interest rates. Years of massive monetary stimulus meant that the dividend yield for many U.S. companies remained higher than the interest those companies had to pay on debt, making it sensible to issue new debt to buyback shares. That all ended when the Fed started raising interest rates, and “as a result investors are no longer rewarding companies for purchasing their own stock,” according to Deluard.


has gained 28.09%, compared with a 33% gain for the S&P 500 index over the same period, according to FactSet. In other words, buying a fund that purchases shares of companies that have consistently bought back their shares hasn’t been better than just buying the S&P 500.

However, the degree to which investors believe that buybacks may be a saving grace for the market is reflected in a recent outperformance of the Invesco fund, up 4.5% so far this week, while the S&P 500 is tracking a weekly rise of 2.4%.

The end of this trend won’t be good for stock market valuations, said Deluard, but it will be good for American corporations, in the long run. He said close to one out of every three U.S. companies pay more in buybacks and dividends then they earn, a trend that cannot continue indefinitely.


have been forced to abandon buyback plans that have helped prop up valuations in recent years. Since 2013, the firm has repurchased $42 billion of its own stock at an average price of $175, Deluard said.

On Tuesday, Big Blue announced a two-year suspension of its buyback program, to maintain it is a single-A credit rating. The stock is trading today at $116 per share.

Repurchasing shares at such inflated levels may have provided a temporary boost to stock prices, but they destroy shareholder value in the end, is the popular criticism among those who decry buybacks. Deluard says that as the market weans itself off what has been a major source of higher support for shares, we shouldn’t expect stock valuations to surpass recent highs soon.

The INTL FCSTone strategist declares that “the market top for this cycle has already passed.”

That may be bad news for stock-market bulls.

BlackBerry to buy cybersecurity firm Cylance for $1.4 billion By Reuters

Futures lower as global growth worries seep in By Reuters

China stocks higher at close of trade; Shanghai Composite up 0.37%...