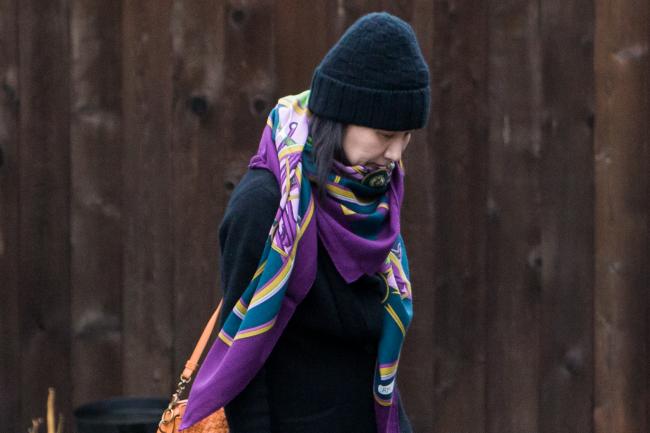 (Bloomberg) — Huawei Technologies Co. wanted a better way to test its telephone handsets, so it sent an engineer to see “Tappy,” the robot in partner company T-Mobile US Inc.’s laboratory in Bellevue, Washington.

“Tappy,” computer-driven and tireless, taps on touch screens, simulating weeks of use in a day. The Huawei engineer was curious about Tappy’s fingertips. So he slipped one into a laptop bag and left with it, in an act T-Mobile branded theft.

The 2013 incident, described in a lawsuit filed the next year by T-Mobile, is the sort of alleged behavior by China’s top telecommunications equipment maker that has alarmed security experts. Now some are warning against the use of Huawei gear in the next-generation 5G network being assembled to connect factories, vehicles, homes, utility grids and more.

“They’ve surpassed everyone else, and the way they’ve done that is through copycat technology and ruthlessly stealing intellectual property from Western companies,” said Jeff Ferry, an economist with Coalition for a Prosperous America, an advocacy group close to the Trump administration and its China hawks.

Representatives of Huawei’s Chinese headquarters referred calls to Chase Skinner, a San Francisco-based Huawei spokesman, who declined to comment. Huawei has regularly denied that it steals intellectual property or unfairly copies technology from other companies. It said this week that blacklisting its equipment without proof will hurt the industry and disrupt the development of new high-speed technology.

But Huawei’s conduct is drawing renewed scrutiny after the Dec. 1 arrest in Vancouver of Chief Financial Officer Meng Wanzhou on allegations she defrauded banks to violate Iranian sanctions. The daughter of Huawei’s billionaire founder Ren Zhengfei, she now faces extradition to the U.S. in a case that’s sparked a diplomatic row.

Meng’s arrest follows a long string of allegations by the U.S. government about a potential threat to network security. The U.S. has pushed European governments to avoid Huawei’s gear, saying it’s an enabler for Chinese espionage, which the company has always denied.

In 2012, the House Intelligence Committee published a report that described Huawei as “a company that has not followed United States legal obligations or international standards of business behavior.” The committee called on the U.S. intelligence community to “remain vigilant,” and said national security officials must block acquisitions involving Huawei or fellow Chinese gear maker ZTE Corp (HK:).

In 2010, the company failed to reach agreements to buy U.S. software and wireless-gear makers, reportedly because the sellers doubted the company would win approval. In 2008, Huawei and Bain Capital Partners LLC abandoned a bid for gear maker 3Com Corp. after failing to assuage security concerns raised by U.S. officials.

The Tappy caper involved a machine that used its mechanical arm to repeatedly poke and prod phone screens, in imitation of a human user, helping T-Mobile to improve the reliability of its handsets. Huawei wanted to know the size of the finger and the material out of which the conductive tip was made, T-Mobile told a federal court in Seattle.

The Huawei engineer, left alone in the lab, first slipped the fingertip behind a computer monitor then three hours later tucked it into his bag, T-Mobile told the court.

“There is some truth to the complaint,” Huawei spokesman William Plummer said at the time. He blamed “employees acting inappropriately in their zeal.” (Another worker had furtively taken photos of Tappy, according to T-Mobile.)

T-Mobile dropped Huawei as a supplier and in 2017 a jury awarded the American company $4.8 million in damages for breach of contract but rejected allegations of misappropriation of trade secrets. The two sides later agreed to drop the case after settlement talks. Michael Kipling, an attorney in the case for T-Mobile, declined to comment and attorney Bo Yue, for Huawei, didn’t respond to a request for comment.

The largest U.S. mobile providers, after urging by U.S. officials, have shunned Huawei network gear, and small providers are concerned they may be forced to rip out and replace Huawei products as the Federal Communications Commission moves against Huawei.

U.S. intelligence and law enforcement agencies harbor a deep suspicion of Huawei, exacerbated by its ties to China’s People Liberation Army, said James Lewis, director of the technology policy program at the Center for Strategic & International Studies in Washington.

“Deep connections with the PLA, industrial espionage, and subsidies from the Chinese government — there you have it,” Lewis said in an interview.

A company executive reiterated this week that it abides by international law, and challenged its accusers to produce evidence of their claims about security risks.

“Despite the efforts to create fear about Huawei and to use politics to interfere with industry growth, we’re proud to say that our customers continue to trust us,” Ken Hu, one of several Huawei rotating chairmen, told reporters during a press event at its manufacturing base in Dongguan, the company’s largest campus worldwide.

“Lots of countries have various concerns on 5G. Most of these concerns are reasonable and based on technology,” Hu said. “With regard to such concerns, we’ll work with governments and operators to clear them up.”

The company also released a diary entry it said Meng wrote, which described an outpouring of support from around the world. It was entitled “There Is Always Good in People!” and explained how a letter writer from Japan said she was “very sad” for Meng’s arrest in Canada and “cannot keep silent any longer.”

Ren, Huawei’s founder, joined the People Liberation Army’s engineering corps in 1974 and rose to become a deputy director, but without military rank, according to a biography by the company. Ren established Huawei in 1987; now the company reports annual sales of about 600 billion yuan, or $93 billion.

The 2012 House report noted that the ruling Chinese Communist Party maintains a committee within Huawei, and said the company failed to explain its relation to the government. Huawei has said the government plays no role in its business decisions or staffing.

But the company is working against hardened sentiment in the Trump administration, Lewis said. “The government in general has decided that the Chinese will never stop misbehaving unless we push back,” Lewis said.

Meng’s case exists alongside a shadow cast by Huawei’s reputation, said Paul Triolo, who leads global technology studies at the Eurasia Group consultancy and who regards the matters as linked.

“It’s definitely connected to the broad concerns about Huawei and its central role in 5G,” Triolo said. “The fear of the U.S. and its allies is that a 5G network built by Huawei represents a risk, a security risk.”

Vulnerability is heightened because 5G systems will rely on software that can be penetrated to a greater extent than 4G networks, and because so many machine-to-machine connections will rely on 5G, raising the stakes for a disruption or espionage, Triolo said.

In Europe, carriers and major customers from Orange SA (PA:) to BT Group (LON:) Plc and Deutsche Telekom AG (DE:) have voiced their concerns about Huawei’s gear, on top of existing bans in Australia, New Zealand and the U.S.

The U.S. Embassy in Germany said allies and partners are being urged to be vigilant in ensuring network security, including when carriers award equipment contracts.

(Updates with comments from Hu in 20th paragraph.)

Wholesale inflation is back again, PPI shows, but it’s not rising as rapidly as...

Bitcoin out of lull, drops to two-week low