Home Business How Strange Will Salem Get On Halloween? 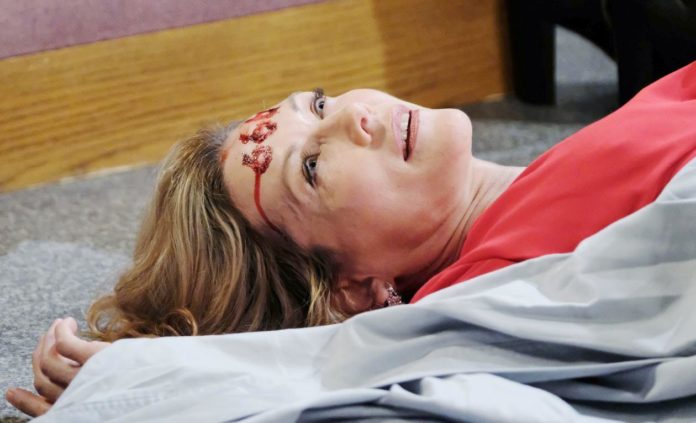 The spookiest night of the year has arrived in Salem on “Days of Our Lives,” and Halloween promises to be the strangest night of all in a town that is very familiar with odd happenings on the Wednesday, Oct. 31 episode.

The past few months leading up to Halloween night have been nothing short of dramatic on the NBC soap, with the attempt on Marlena’s (Deidre Hall) life, the reappearance of both Hattie (also Hall) and Bonnie (Judi Evans), Kristen’s (Stacy Haiduk) brief reign of terror, Gabi’s (Camila Banus) plot against Abigail (Marci Miller), and a heartbreaking warehouse explosion. However, all of it will culminate in a Halloween night meant to be the creepiest of all.

According to “Days” spoilers, “things in town take a strange turn on Halloween” and “familiar faces return.” A preview clip for the week’s episodes (see above) showed the reemergence of Hope’s (Kristian Alfonso) alter ego, Princess Gina, a dead Kristen, a baby Andre and a vampiric Vivian (Louise Sorel). However, it’s more likely that these faces will all be there as part of some scary dreams by Salem’s residents, since Hope isn’t likely to suddenly act out of character, and Vivian and Kristen are already believed to be dead—especially after the warehouse where Kristen was working with Dr. Rolf (William Utay) to bring Salem’s most evil residents (including Vivian) back to life—blew up.

As for who may be having these dreams, Hattie seems to be the most likely candidate, as the spoiler also tease that she may finally decide to give John (Drake Hogestyn) a divorce and will willingly stop pretending to be Marlena.

“Hattie realizes pretending to be Marlena isn’t all it’s cracked up to be,” the spoilers reveal. “and John scores a major win.”

Hattie refused to stop pretending to be Marlena initially because she caught on to the scheme John and Roman (Josh Charles) were trying to pull on her, but if she has a vivid enough dream regarding the kinds of threats Marlena faces on a daily basis from the evil faces who somehow always find a way back to Salem, she could quickly decide that being her doppelganger isn’t worth the stress. With that, she could agree to give John his divorce, and the truth about Marlena and Hattie being switched so the real doctor could recover from her gunshot wound may finally be revealed.

“Days of Our Lives” airs weekdays on NBC.

It’s Halloween night, and things take a strange turn in Salem on the Oct. 31, 2018 episode of “Days of Our Lives.” Photo: XJ Johnson/JPI Studios for NBC

NBCC to soon come out with policy on stalled, new projects

VW brand warns 2018 operating return on sales to be at...

Stock market’s selloff is only half-done, and final leg will come...