Home Banking How a 200% surge in a triple-leveraged natural-gas ETN can be a... 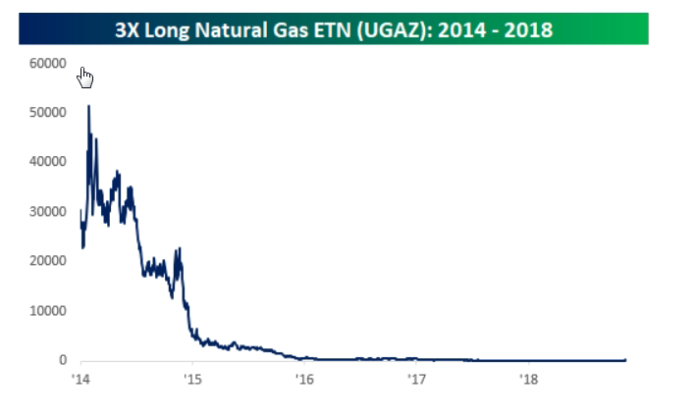 Gas futures are surging. But the value of a triple-leveraged exchange-traded note is seeing a parabolic move, and drawing some attention on Wall Street.


has returned 77% so far this week, pushing its year-to-date gain of nearly 200%, according to FactSet data.

The jump in the leveraged product, of course, shouldn’t be a surprise, given that natural-gas futures for December delivery


are jumping 10% on Wednesday and have climbed about 23% this week.

Commodity experts are speculating that at least part of the catalyst for the rally in natural gas to its highest level in about four years is a cold snap in the East Coast, with the move higher amplified by a paired bet by speculators who simultaneously went long oil futures, betting on a crude price rise, while shorting natural gas, or betting that prices of the fuel would fall.

However, the exact opposite has played out. U.S. crude oil


shed a quarter of its value over the past six weeks, a decline that matches the traditional definition of a bear market. As a result, market participants belief, a number of traders were forced to unwind their wrongway bets which has helped to exacerbate the surge in natural gas and the fall in oil.

However, strategists at Bespoke Investment Group use the surge in the natural-gas ETN as a teachable moment, noting these leveraged ETNs go down just as fast as they go up: It is “important to remember that the way they are structured makes holding them for any extended period of time a sucker’s bet,” wrote Bespoke in a Wednesday note.

Bespoke writes: “Just take a look at the long-term chart of UGAZ [see chart above]. After taking all of the reverse splits into account over the years, of which there were three (1-10, 1-25, 1-5), UGAZ’s price in early 2014 was over $50,000 per share. So, even though the price has tripled in the last two weeks, UGAZ is still down over 99.5% from its high less than five years ago”

Moves in natural gas and oil have rattled investors, with the Dow Jones Industrial Average


and the Nasdaq Composite Index


remained under pressure amid concerns that tanking commodity prices were sending a bearish signal to investors about the economy.

NPA trouble: State-run banks require an urgent Rs 1.2 trillion in capital in the...

As data localisation deadline approaches, payments firms get ready for a showdown with RBI

Peru stocks lower at close of trade; S&P Lima General down 0.01% By Investing.com