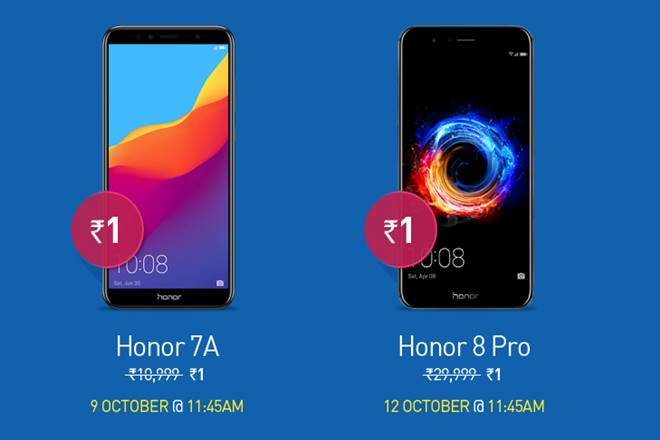 The festive season is here and so are the discounts! E-commerce giants Flipkart and Amazon have already announced the dates for ‘Big Billion Days’ and ‘Great Indian Festival’ sale while other markets players are also likely to follow the footsteps. Hoping on to the bandwagon, smartphone maker Honor has also announced several offers on its smartphones in India. The Honor Dussehra Sale will go live between October 10 and October 15 on the smartphone maker’s official e-store – the HiHonor Store.

Under the Honor Dussehra Sale, the company offers major discounts on various smartphones like Honor 9N, Honor 9 Lite, Honor 7S, Honor 7A, Honor 7C, Honor Play, and Honor 8 Pro. While the company is offering free coupons worth Rs 1,800 and discounts of up to Rs 4,000 as part of the sale, the deal that should catch your eye is ‘devices @ Re 1’.

Apart from these two smartphones, Honor Band 3 will also be available for just Re 1 under the Dussehra Sale. It will be up for grabs on October 15 at the same time. All these products are likely to be available till the stock lasts.

Boeing to hold airline call on 737 MAX systems after Indonesia crash: sources By...

Jet Airways Diwali offer: Now, grab up to 30% off on flight tickets; check...

India may impose anti-dumping duty on a chinese chemical