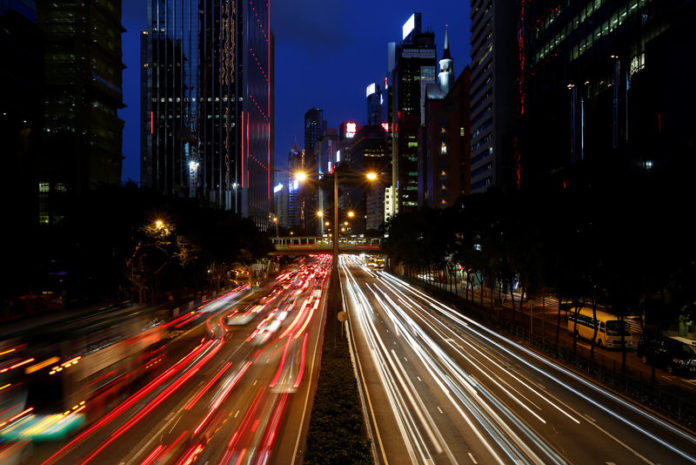 HONG KONG (Reuters) – Hong Kong’s economic growth is expected to have moderated in the third quarter as trade tensions between Beijing and Washington as well as higher interest rates take a toll, posing broader risks to growth in the Asia financial hub next year.

The average forecast from five economists is for a third-quarter growth of 2.9 percent from a year earlier, easing from 3.5 percent in the April-June quarter.

That marks a notable slowdown from the 4.6 percent growth in the first quarter, which was the city’s strongest performance in nearly seven years.

“Next year will be quite tough, given the trade war,” said Kevin Lai, chief economist for Asia ex-Japan at Daiwa Capital Markets in Hong Kong.

“Also, there’s a huge liquidity issue right now. We’re seeing a lot of money outflows in Hong Kong,” he said, adding that continued outflows will put severe pressure on the peg which would have a huge impact on GDP growth.

The government, which is due to report GDP figures on Friday, has forecast full-year growth at 3-4 percent. The average forecast from four economists is for 3.4 percent.

On a quarterly basis, economic growth in April-June contracted 0.2 percent on a seasonally-adjusted basis – the worst reading in four years – compared with 2.1 percent growth in the first quarter.

The economists did not provide quarterly estimates from the preceding quarter.

Uncertainty over a simmering trade dispute between Washington and Beijing has unnerved Hong Kong officials at a time when the city is already seeing signs of a broader slowdown and weaker consumer spending.

In August, the city’s commerce and economic development secretary told Reuters that around 7 percent of Hong Kong’s total exports could be impacted if the United States imposes a new round of trade tariffs on China.

Trade and logistics remain one of the pillars of Hong Kong’s economy, and account for nearly one-fifth of its GDP, higher than the financial sector. More than 700,000 people are employed in the trade and logistics sector.

Hong Kong’s retail sales in September grew at their slowest pace in 15 months, while home prices in one of the world’s least affordable markets have cooled as interest rates rise, bringing an end to an era of cheap money.

Investment and visitor spending have also been hit by sharp falls in the benchmark Hang Seng Index () – down around 14 percent so far this year – and a weaker yuan.

The number of mainland Chinese visitors to the city grew 3.9 percent in September, the slowest pace of growth so far in 2018, dented in part by the impact of Typhoon Mangkhut.

Analysts are optimistic, however, that tourist arrivals from mainland China will remain strong over the longer term as the Guangzhou-Shenzhen-Hong Kong high-speed railway and Hong Kong-Zhuhai-Macau Bridge will drive up mainland tourist numbers.

World Economy This Week By Bloomberg

WhatsApp testing new mode that will let you enjoy holidays in peace – How...

Brazil stocks lower at close of trade; Bovespa down 0.18% By Investing.com