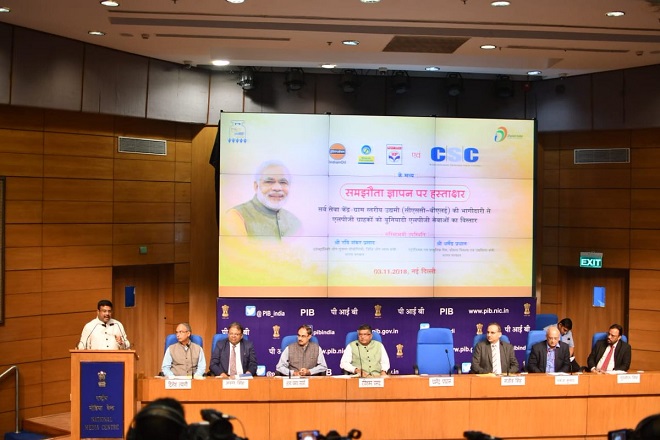 Amid criticism of the Pradhan Mantri Ujjawala Yojna that the beneficiaries are switching back to traditional cooking stoves, Oil Minister Dharmendra Pradhan said that the 80% beneficiaries have asked for an average of four refills. He was speaking at an event.

The government, in August this year, achieved the target of distributing 5 crore partially-free LPG gas connections poor families, eight months ahead of the target. However, it was received with criticism when some media reports said that despite getting the LPG connection under the scheme, some families were switching back to traditional –wood, coal or cow dung-based — cooking stoves.

Dharmendra Pradhan said at the event that so far 5.75 crore gas connections have been given. “I’m proud to say that nearly 80% of PMUY beneficiaries return for average 4 refills, which is an encouraging trend in itself & with CSCs sharing the load of LPG distribution along with our 22000 existing distributors, I’m sure we will be able to address last mile gap.,” he said.

I’m proud to say that nearly 80% of #PMUY beneficiaries return for average 4 refills, which is an encouraging trend in itself & with CSCs sharing the load of LPG distribution along with our 22000 existing distributors, I’m sure we will be able to address last mile gap. #LPGatCSC pic.twitter.com/mslR3IagSp

With the successful implementation of #PMUjjwalaYojna, nearly 5.75Cr connections have been provided. During #GramSwarajAbhiyan we received feedback for last mile issues of New Booking, Refill & Door Step Delivery of LPG in remote areas, This step will help address that.#LPGatCSC pic.twitter.com/5crKM8bOQB

The scheme launched in April 2016 has been received well by international organisations such as the World Health Organisation (WHO) for not only providing women with advanced cooking stoves but also enabling the access to clean energy. WHO earlier this year had lauded Ujjwala Yojna for helping in reduction of air pollution even as nine of 10 most polluted cities were identified in India.

How to save twice your salary (or more) by age 35