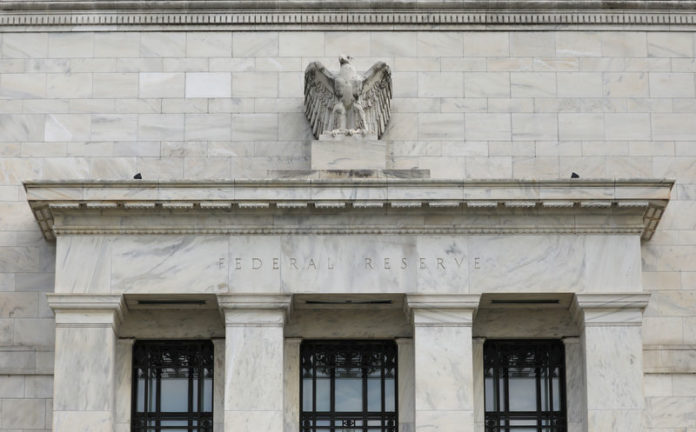 © Reuters. The Federal Reserve building is pictured in Washington, DC

LONDON (Reuters) – A potentially huge shift is underway in the U.S. bond market, underscored by a historic swing in hedge fund positions: investors are beginning to think the U.S. economy is close to peaking and the Fed is near the end of its rate-raising cycle.

Speculators on U.S. futures markets slashed their bearish bets on 10-year Treasuries last week by the largest amount since April 2017, and the third largest since the Commodity Futures Trading Commission began compiling data in 1995.

The move didn’t come in isolation. The global economy is stuttering, stock markets are wobbling and a growing number of Fed officials are signaling that the Fed could be closer to the end of its cycle than previously thought.

Money market pricing points to another rate hike next month – the ninth of the Fed’s tightening cycle – but only one more next year is fully discounted. As of September, Fed policymakers expected to need to increase rates three more times next year.

Analysts at Morgan Stanley (NYSE:) reckon that unless further tightening next year is accompanied by forward guidance for rate hikes beyond those outlined in the Fed’s “dot plots”, then 10-year yields “have indeed peaked for this hiking cycle.”

“We … believe U.S. rates have ended the cyclical bear market,” they wrote in a note last week.

Their counterparts at Citi are also bullish on Treasuries, citing safe-haven demand as investors shun crumbling credit and stock markets. “A short squeeze in Treasuries is likely and should fuel further gains near term,” they wrote in a note last week.

CFTC data for the week ending Tuesday Nov. 13 show that funds and speculative accounts slashed their net short 10-year Treasury futures position by 205,991 contracts to 333,195 contracts. There have only been two bigger weekly positioning swings in favor of bonds since 1995.

As recently as Sept. 30 funds and speculators were sitting on a record net short position of 756,316 contracts. This has been more than halved in less than two months.

Global growth fears have intensified in recent weeks, and the resulting damage to stock markets has boosted the allure of safe-haven bonds. The fell nearly 7 percent in October, its worst month in more than seven years.

It was a grim month for hedge funds, the worst in at least five years. With reporting in from over 2,000 funds, Barclayhedge’s broadest hedge fund index fell 3.16 percent in October.

Creaking stock markets have intensified debate around the Fed. The fed funds target rate is currently in a 2 to 2.25 percent range, just below the lower end of the 2.5 to 3.5 percent range Fed officials reckon is the neutral level of rates that neither stimulates nor brakes the economy.

Funds, speculators and money market traders are betting on the lower end, and little wonder. Bank of America (NYSE:) Merrill Lynch’s fund manager survey in November showed the most bearish outlook for global growth since November 2008, and the gloomiest outlook for corporate earnings since June 2012.

“We are at a point now where we really need to be especially data dependent,” Fed Vice Chair Richard Clarida said on Friday. “I think certainly where the economy is today, and the Fed’s projection of where it’s going, that being at neutral would make sense.”

Facebook to buy back additional $9 billion of shares By Reuters