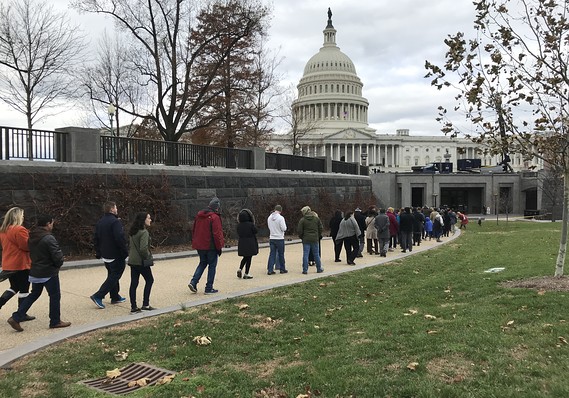 Americans who paid their respects Tuesday to George H.W. Bush emphasized that they would remember the late president for the times he was statesmanlike, steady and humble, noting Washington today seemed short on those qualities.

“There’s a little bit of deficit of leadership these days, and I thought President Bush was an extraordinary leader, especially the humility that he showed over a long career,” said David Krysiak, a 35-year-old from Philadelphia, after he and his 4-year-old son had visited the Capitol Rotunda, where Bush’s remains were lying in state.

Krysiak said it was important for his son to experience the occasion, and they wanted to honor Bush’s family and his service.

“I just think he was a wonderful president who was a true gentleman,” said Gayle Fisher, 63, who added that she worked in the 1980s for then-Vice President Bush as an assistant press secretary. “I wish more presidents could be more statesmanlike, like he was.”

Bush made sure to send her a photo with a personal message after they met in Italy when he was president and she was based there for a different job, she said. “I just remember him as a very, very kind, thoughtful, generous man who was always thinking of other people, writing notes to people,” said Fisher, who now works in public affairs for the Energy Department and is primarily based in Kansas City, Mo.

“He thought before he spoke. I liked him as a person,” said Pessy Lew, a 47-year-old resident of Brooklyn, N.Y., after her visit to the Rotunda. Lew said she’s “not very political,” and she largely appreciated how Bush behaved in a presidential way and was a family man.

“When he was president, he had a steady hand on the wheel,” said Donn Roebke, a 72-year-old retiree living in northern Virginia.

Roebke noted he didn’t feel “rushed through” while paying his respects, adding that the experience Tuesday in the Rotunda left a real impression: “It was kind of one of those scenes that you will always remember — just quiet and respectful.”

The 41st commander-in-chief’s remains were due to lie in state in the Capitol Rotunda until Wednesday morning. His funeral was scheduled to be held at the Washington National Cathedral on Wednesday.

Speaking to The Wall Street Journal’s CEO Council meeting in Washington, Bush’s son Jeb remembered his father as competitive and entrepreneurial, and told a story about former Secretary of State James Baker sneaking martinis into Bush’s hospital room to drink together.

The younger Bush also said President Donald Trump and First Lady Melania Trump have been “really gracious” since the death of his father. Jeb Bush ran against Trump for the Republican presidential nomination in 2016.

After underperformance, gold is now witnessing the start of next bull run

U.S. companies distancing themselves from Saudi money amid Khashoggi affair

Bitcoin for payments a distant dream as usage dries up