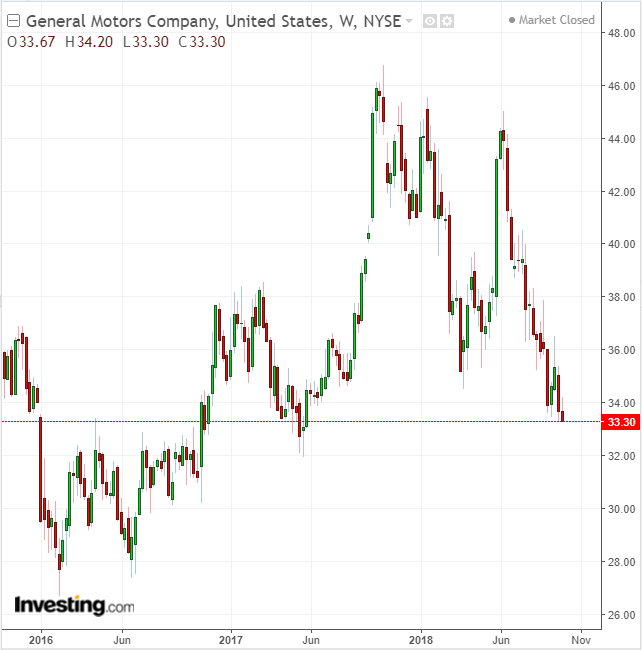 After Sunday’s announcement of a new US, Canada, and Mexico trade agreement, General Motors (NYSE:) shares bounced slightly on Monday. On Tuesday, however, shares slipped more than 2%, even though the new trade agreement is generally considered to be good news for auto manufacturers.

What’s more, the US economy is widely regarded as “booming.” Still, car sales have dropped over the past few months, weighing on GM’s stock; shares have fallen over 35% since hitting a high of $46 in October 2017.

Is there reason to think the latest headlines make this a good time to derive value from GM’s beaten down stock? Much will depend on what the Detroit automaker’s Q3 2018 earnings report, released on Wednesday October 24 before the market opens, will reveal.

At its inception, in 1994, the North American Free Trade Agreement (NAFTA), made it possible for automotive manufacturers to lower costs by producing cheaper parts in Mexico, according to the Center for Automotive Research.

The recently announced United States-Mexico-Canada Agreement (USMCA) stops the implementation of the 25% tariff on imported vehicles from Mexico and Canada. It does not, however, eliminate the steel and aluminum tariffs. Still, the USMCA is considered a positive move for the auto industry. It’s not a major change from what was in place previously, and it allows car makers to return to “business as normal,” according to Forbes.

This should be a welcome development for General Motors. But even with this new trade deal, we don’t see a lot of upside to buying General Motors right now. Here’s why.

In its Second Quarter report, General Motors cited growth in total worldwide vehicle sales, as well as a 1.5% market share increase, compared to the same time last year. However, these vehicle sales were partly driven by an increase in fleet sales: as a percentage of total retail vehicles sold, fleet sales increased to 14.2%.

This expansion in percentage is actually problematic. Fleet sales aren’t as profitable as passenger car and truck sales, likely due to volume discounts or incentives to rental car companies, although General Motors doesn’t specify exactly why this is the case.

As well, during this same period, General Motors absorbed an increase in material costs due to the above mentioned tariffs. Consequently, while vehicle sales were up, General Motors still reported a 1.9% drop in total net sales and revenue.

Additionally, insiders familiar with the matter said General Motors’ sales fell 13% in August, according to Bloomberg. A reduction in vehicle sales incentives and a softening retail market were to blame, according to Jeff Schuster, the senior vice president of forecasting for LMC Automotive.

Though the above isn’t the best news for the company, it’s not nearly as concerning as future predictions. Over the past few years, new car sales have surged to record highs. This year, though, sales have slowed. This lag is projected to continue for two major reasons: rising interest rates and a considerable influx of leased vehicles being returned to the market.

One of the biggest drivers of record new vehicle sales was “pent-up demand” according to Cox. But, as the standard lease is three years, expiration dates are at hand and many ‘gently used’ leased cars are returning to market. Thus, new vehicle demand is slowing as desirable vehicles are being offered at a discount.

This will likely impact General Motors’ bottom line when it releases its latest . The August sales decline mentioned above is leading analysts to predict a reduction in GM’s growth. Indeed, analysts at Zacks estimate earnings of $1.28 per share, which is a year-over-year decline of 3.03%.

All of this should be a concern for investors looking for a strong growth stock. But there is an upside as well. First, General Motor’s forward price-to-earnings ratio is 5.81. That’s significantly lower than the automotive industry average of 12.66, meaning GM is trading at a discount.

Second, General Motors offers an annual dividend of $1.52. That may not seem all that significant, but at the stock’s current price per share of $34.25, it’s a generous 4.44% yield. Plus, GM’s payout ratio is a very healthy 25.5% so the dividend is not only sustainable but has room to grow.

Finally, analysts at Yahoo Finance give General Motors a one-year target estimate of $45.47 a share. Considering General Motors’ shares are $34.25 as of this writing, that’s a fair amount of potential growth for the next year. Take this target with grain of salt, however, since there doesn’t seem to be much in the company’s pipeline to justify the jump.

The new trade deal is welcome news for auto manufacturers. But, even once the deal is signed (Congress still has to ratify it in 2019), there remain additional risks for General Motors.

Therefore, we believe the stock is only a buy right now if you are comfortable with high volatility. If not, it’s better to reconsider after the GM’s Third Quarter report is released. At that point we should have a better understanding of what General Motors’ sales look like and what it forecasts going forward.

Married men earn more than everyone else (including single men)

SoftBank in talks to take majority stake in WeWork: WSJ By Reuters

The stock market is setting up for another rally, according to...