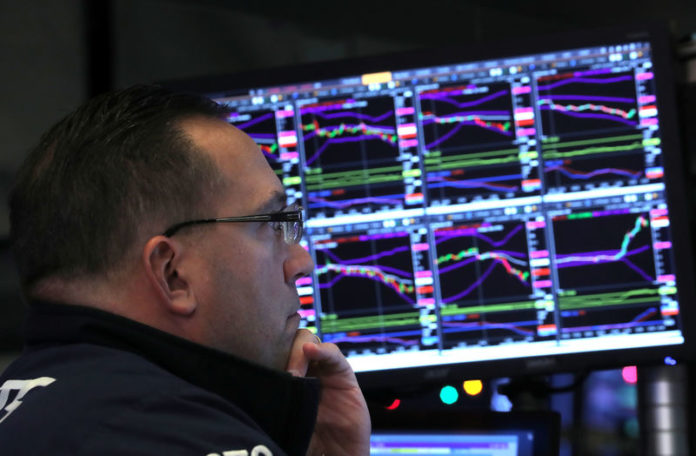 © Reuters. Trader works on the floor of the NYSE in New York

The losses in the first few minutes of trading might have been even steeper, but CME Group’s Chicago Mercantile Exchange implemented a series of 10-second trading halts that helped limit the initial drop.

Investors were wary of hot-button issues that could create volatility in the coming days and weeks, including Thursday’s meeting of the Organization of the Petroleum Exporting Countries, Britain’s Dec. 11 parliamentary vote on a Brexit plan, and a 90-day deadline for a U.S.-China trade agreement.

“Tomorrow is certainly going to be about testing that close” from Tuesday, said Jim Paulsen, chief investment strategist at The Leuthold Group in Minneapolis. “I suspect we’re going to go lower tomorrow at some point during the day.”

U.S. stocks had tumbled more than 3 percent on Tuesday as the U.S. bond market sent unsettling signs about economic growth and investors worried anew about global trade. U.S. equity and bond markets were closed Wednesday, a day of mourning for former President George H.W. Bush, 94, who died on Friday.

Skepticism about prospects for a trade deal was a key reason behind Tuesday’s decline. But China expressed confidence on Wednesday it could reach a deal, a sentiment echoed by U.S. President Donald Trump a day after he warned of more tariffs if the two sides could not agree.

“You saw the U.S. equity markets catch up to what the bond markets already knew earlier this week – there really is no done deal when it comes to trade and tariffs,” said David Lafferty, senior vice president and chief market strategist at Natixis Investment Managers. “I think U.S. investors are now going to ask themselves, Will the market again fall for the head fakes?”

Peter Tuz, president of Chase Investment Counsel in Charlottesville, Virginia, and other investors said Tuesday’s sell-off could lead to some bargain hunting on Thursday, but he said uncertainty over trade and other issues will heavily influence sentiment in the near term.

“We’ve got a very narrow path for the bull,” Paulsen said. “People aren’t talking about it, but in some sense the primary problem is stagflation. It’s a problem that you’ve got people worried about too hot and too cold at the same time.”

How to keep decking the halls from wrecking your career

If you’re worried about retiring at a stock-market top, this might...