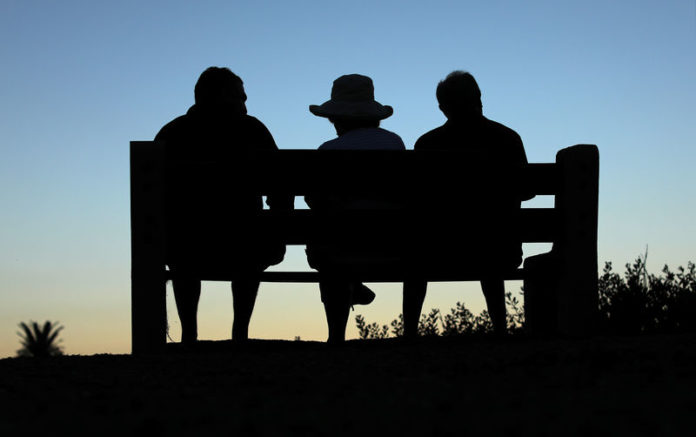 © Reuters. Elderly people sit on a park bench after sun set in Encinitas

CHICAGO (Reuters) – American homes are showing their age – not the houses, but the people living in them.

In 2016, about 55 percent of U.S. households (or about 65 million households) were headed by someone aged 50 or older, according to the Joint Center for Housing Studies of Harvard University (JCHS). That is the highest percentage since the center began keeping records in 1960 and likely a historical first for the United States.

In years to come, the housing picture will become even more gray as baby boomers head into their seventies and eighties.

Many will need accessible housing that can accommodate disabilities and mobility challenges – far beyond what can be met by current supply. Perhaps the most striking aspect of this report is that the biggest challenges will be faced by people now in their fifties, because they will enter retirement with lower income and wealth than the current generation of seniors. This group will face a housing crunch marked by a shortage of age-appropriate housing that they can afford to own or rent.

“We need to address gaps in the affordability and accessibility of our housing stock,” said Jennifer Molinsky, lead author of the report. “As the number of households in their 80s grows, it will be essential that we strengthen the links between housing, healthcare, and other services.”

Are we prepared to meet these challenges? Not even close.

The report notes that the number of households aged 80 and above jumped 71 percent from 1990 to 2016, to 7.5 million. But with the aging of the baby boomers, the number of households in this age group will more than double by 2037. “This is a group that tends to need more services and accessibility features,” Molinsky said. “Do we have enough accessible housing, and enough services that can be brought into homes? The short answer is – no.”

The JCHS report tells a tale of two groups of older Americans: those who are retired now, and those who will retire in the future. In households headed by retired people, income has grown significantly in recent years. For example, median annual income rose 9.6 percent from 2011 to 2016 for households aged 65-79 (to $44,100). During the same period, income gains for working-age households in their 50s to mid-60s rose just 2.6 percent to a median of $66,500 – a number that in real terms is still behind where it was in 2010 during the depths of the Great Recession.

This trend is worrisome for several reasons. First, it means that fewer of these younger households are participating in the wealth-building typically associated with home ownership. And fewer will be able to tap home equity as a backstop in retirement to fund large expenses such as long-term care. Finally, it means more people will be exposed to the volatility of rental rates.

The JCHS report notes that a rising number of older Americans are “cost-burdened” when it comes to housing, meaning they are spending more than 30 percent of income on housing. In 2016, 9.7 million households were cost-burdened, and another 4.9 million were “severely burdened,” meaning they paid at least half of their income for housing.

Homelessness among older adults is rising. Research in this area is limited, but data from the U.S. Department of Housing and Urban Development (HUD) points to a 48 percent increase in “sheltered homelessness” among adults aged 62 or older from 2007 to 2017. (The term “sheltered” refers to people staying in emergency shelters or transitional housing programs.) And the JCHS report notes that homelessness in New York City among adults aged 65 and above nearly doubled from 2011 to 2015.

Meanwhile, federal funding for housing that is affordable for low-income households all but disappeared during this decade. Congress allocated $5 million in fiscal 2017 for the HUD Section 202 Housing for the Elderly program, which focuses on providing housing to very low income seniors – the first funding since fiscal 2011. Congress provided $105 million in fiscal 2018. Meanwhile, JCHS notes that many older adults live in low-density areas and in single-family homes, and can become isolated when they stop driving; this will create pressures in the years ahead on communities to provide new housing and transportation options.

“We’ve seen all these things coming but the numbers are staggering,” said Linda Couch, vice president of housing policy at LeadingAge, an association that represents aging-services agencies. “We have a major issue here with people in their fifties and sixties – they will have a hard time affording not only housing but healthcare,” she said. “And they will be 70 and 80 before we know it.”

(The opinions expressed here are those of the author, a columnist for Reuters.)

(Reporting and writing by Mark Miller in Chicago; Editing by Matthew Lewis)

U.S. Housing Starts Rise in Line with Expectations in October By Investing.com

How Iran spreads disinformation around the world By Reuters

A slew of investment offers marks first day of ‘Make in...