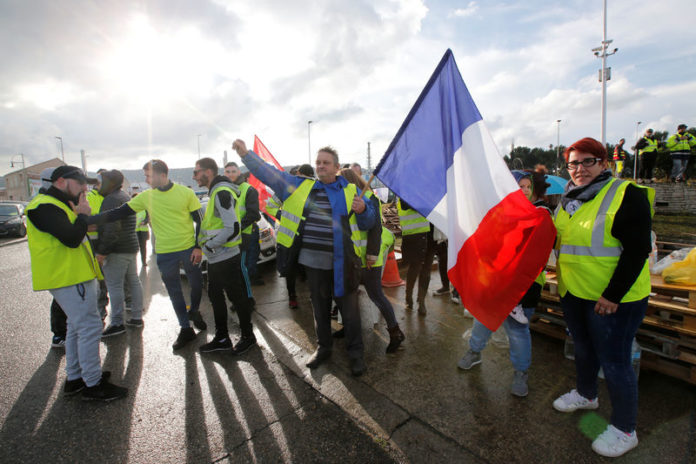 © Reuters. A demonstrator wearing yellow vests, a symbol of a French drivers’ protest against higher fuel prices, holds a French flag as they block the access to the Total biodiesel refinery at La Mede

On Saturday November 17, more than 280,000 demonstrators took part in the protests all over the country. Some of them kept on protesting and blocking roads since then. The protesters, known as the “yellow vests”, are planning to hold a large demonstration in Paris this coming Saturday.

“We have a true problem as some stores have been closed for a week now because of the blockades. One week without revenue is dramatic for a company. We are asking for free access for our staff and customers to the stores and the warehouses,” he said.

“We are at the beginning of the Christmas season, today it’s Black Friday, a crucial time for retailers. If retailers cannot work and customers cannot shop, it’s bound to have a major impact on employment,” he warned.

Back Friday, the day after the Thanksgiving holiday, was so named because spending in the United States would surge and retailers would traditionally begin to turn a profit for the year – moving from the red ink into the black.

The Black Friday discount sales day starts on November 23 and will be followed three days later by Cyber Monday.

What protection is available to a depositor if bank fails: Delhi HC asks Centre