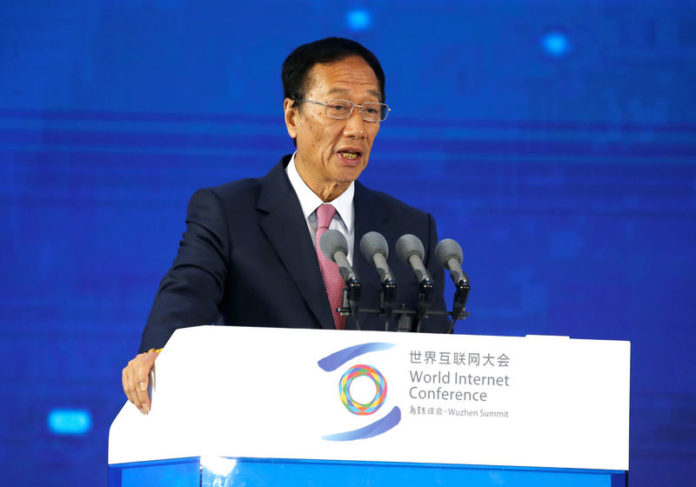 © Reuters. Terry Gou, founder and chairman of Foxconn, attends a forum on industrial internet at the fifth WIC in Wuzhen

TAIPEI (Reuters) – Taiwan’s Foxconn posted a weaker than expected rise in quarterly profit amid warning signs from key customer Apple Inc (NASDAQ:) and its global suppliers that demand for iPhones could be softening.

While this was the biggest quarterly profit the company has posted this year and came in 18 percent above the year-earlier results, it was below a mean estimate of T$28.26 billion ($916.85 million) from nine analysts, according to I/B/E/S data from Refinitiv.

“Compared to the previous quarter’s profit growth, the main reason for the results was entry into the peak season, increase in shipment scale, and rise in production efficiency and yield,” a company official told reporters.

“In addition, costs controls were good, the ratio of operating expenses was smaller, which led to a profit increase performance,” the official added.

Apple warned earlier this month that holiday sales would miss Wall Street expectations due to weakness in emerging markets including India and foreign-exchange costs.

Shares in Foxconn and other Asian suppliers and assemblers for Apple fell on Tuesday after several component makers warned of weaker than expected results, leading some market watchers to call the peak for iPhones in several key markets.

Last week, Hon Hai reported that its October sales were up 21.5 percent year on year, the slowest year-on-year growth rate for any month since April.

Analysts said Apple changing the bottom cover of the iPhone 8 and iPhone X from metal to glass hurt profits at Foxconn, which had supplied the metal component.

Foxconn’s gross margin this year is unlikely to return to the 7 percent it enjoyed in the 2015-2016 fiscal years due to weakening iPhone shipment growth and lower prices for metal casings, Fubon Research analyst Arthur Liao said in a research note ahead of the company’s earnings.

Foxconn is a key assembler of the iPhone XR model, according to analysts, the cheapest of this year’s new launches and a model that is likely seeing very little traction with customers.

The Political Split That Will Determine Brexit By Bloomberg

Will Carly Make Things Worse For Michael and Sonny?