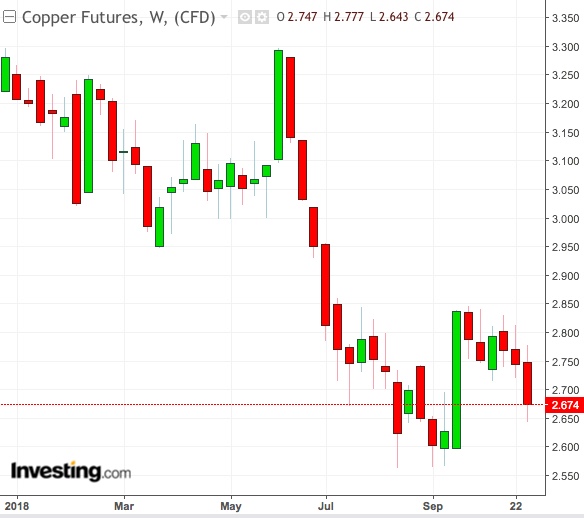 US growth figures have been on a tear for most of this year, while global equity and prices have just experienced one of their worst selloffs—leading to an economic narrative that simply isn’t consistent enough for investors to buy into propping up copper prices.

With just two months left to 2018, New York-traded are down 19 percent on the year, hitting six-week lows in Tuesday’s final session for October. The red metal rose during only three out of the past ten months, a far cry from its 2017 scoresheet of six positive months and a 31 percent gain.

But copper isn’t the only poor performing industrial metal this year. UK-traded and , in fact, lead losses on the base metals complex, falling more than 24 percent and 22 percent, respectively.

Yet copper has more significance than other non-ferrous metals. Given its application in almost every form of infrastructure—from home building to electronic circuitry—it is heralded for its so-called “ability” to foretell economic health, making it the only industrial commodity other than oil to have a fundamental relation with the global economy. Highs and lows in copper prices tend to reflect sound and poor conditions, respectively, in the world economy. Hence, the moniker: Dr. Copper.

Yet, divergence in growth among the US, European and emerging markets this year hasn’t made copper a credible barometer for accurately predicting growth across the world. Copper’s own supply, demand and price woes this year are largely due to one factor: China.

Since the US-Sino trade war accelerated in July, copper prices have fallen almost every month, and for good reasons: China is the largest consumer of the metal—accounting for nearly half of the world’s estimated 24 million tones demand—and the US is one of its main sources.

Copper’s price slide deepened in August, with New York-traded futures falling 6 percent after an almost identical percentage drop in purchases of the metal by China. In September, however, US copper prices jumped 5 percent—a rare gain for the year—after China’s raw copper imports surged to their highest level in two and a half years.

Given the “yo-yo” dependency of copper prices on the US-China “demand string,” it wasn’t surprising to see a new lower leg in the market this week after US President Trump said he will impose billions of dollars of new tariffs on all remaining Chinese goods entering the US, if his talks with China’s leader Xi Jinping don’t yield a trade agreement. The bilateral meeting is to be held on the sidelines of a G20 summit in Buenos Aires between November 30 and December 1.

In Wednesday’s session, copper for December delivery on the COMEX metals division of the New York Mercantile Exchange settled at $2.654 per lb, down 20 percent from the year’s peak of $3.297 hit on June 7.

Investing.com’s daily technical outlook has a “Strong Sell” call on December copper, with Fibonacci patterns indicating first tier support at $2.648, second at $2.641 and third at $2.628.

Despite the generally bearish outlook on copper, Bank of America Merrill Lynch remains positive on the metal. While acknowledging that the US-China dispute has led to dislocation between prices and fundamentals of copper, an upward correction is still possible, BAML said in its latest Global Metals Weekly bulletin.

Forecasting that 2018 copper mine supplies might be at a slight deficit to that of 2016, the Wall Street bank cited other positives such as more restocking of the metal through supply chains as confidence levels grow, and potential production disruptions in coming quarters.

But it also added that these might be offset by re-exports of copper by China, which would reduce demand for new, original metal, and any drop in global consumption recovery.

The 2018 UK & European Employee Engagement Awards extends its deadline and confirms its...