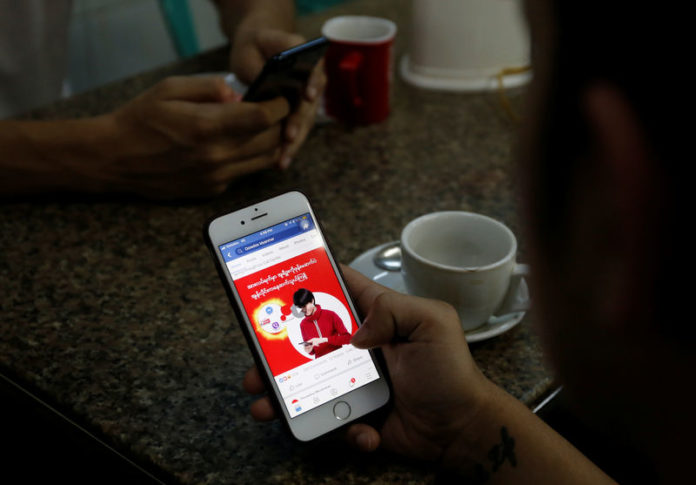 © Reuters. A cellphone user looks at a Facebook page at a shop in Latha street in Yangon

(Reuters) – Facebook Inc (O:) has removed hundreds of additional accounts, pages and groups in Myanmar from its social networks after discovering what it called “coordinated inauthentic behavior” and links to the country’s military.

The social media giant had previously removed accounts, including that of Myanmar’s army chief, after criticism it had failed to act on hate speech amid violence against Rohingya Muslims in the country.

It was continuing to investigate other pages that “mislead others about who they are, or what they’re doing” and could breach the company’s policy on misrepresentation, Facebook said.

The shuttered pages included “seemingly independent news, entertainment, beauty and lifestyle Pages were linked to the Myanmar military” and other pages removed in August, Facebook said.

The removal of Myanmar-linked pages in August followed a U.N. fact-finding mission that called for top Myanmar generals to be prosecuted for what it said was a campaign of mass killings and gang rape against the Rohingya carried out with “genocidal intent”.

In 2017 the military led a crackdown in Myanmar’s Rakhine State in response to attacks by Rohingya insurgents, pushing more than 730,000 Muslims to neighboring Bangladesh, according to U.N. agencies.

A Reuters special report in August found that Facebook failed to promptly heed numerous warnings from organizations in Myanmar about social media posts fuelling attacks on minority groups such as the Rohingya. (link: https://www.reuters.com/investigates/special-report/myanmar-facebook-hate/)

The U.N. fact-finding mission singled out Facebook for criticism over its failure to address hate speech in Myanmar.

Facebook said in November a human rights report it commissioned showed it had not done enough to prevent its social network from being used to incite violence in Myanmar.

Intel Stock Prepares for Next Move After Breakout