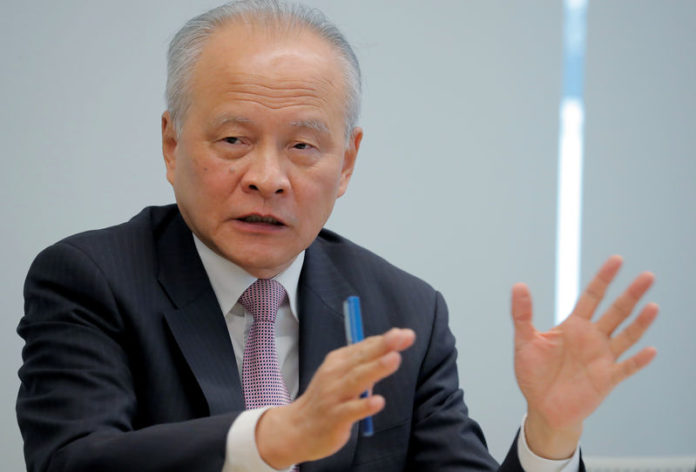 © Reuters. China’s ambassador to the United States Cui Tiankai answers reporters questions during an interview with Reuters in Washington

WASHINGTON (Reuters) – China’s ambassador to the United States said on Tuesday he does not believe Beijing is seriously considering using its massive U.S. Treasury debt holdings as a weapon in the U.S.-China trade war, citing concerns that such a move would destabilize financial markets.

“We don’t want to cause any financial instability in global markets. This is very dangerous, this is like playing with fire,” Ambassador Cui Tiankai told Reuters in an interview when asked if China would consider selling Treasuries or reducing purchases should trade tensions worsen.

“I don’t think anybody in Beijing is thinking seriously about this. It could backfire,” he added.

Trade and economic analysts have often said China could slow its purchases of U.S. Treasuries or sell off its holdings to pressure Washington into a deal.

China is the largest foreign holder of U.S. Treasury debt, with $1.15 trillion on Sept. 30, according to the latest Treasury data, compared with $1.19 trillion a year earlier. As of Monday, there was about $15.97 trillion of total public Treasury debt outstanding.

Cui said China’s Treasury holdings were a good example of the economic interdependence between the United States and China — a relationship that he said would be nearly impossible and dangerous to untangle.

RBI vs Govt: Will the central bank become a victim of reckless government policies?