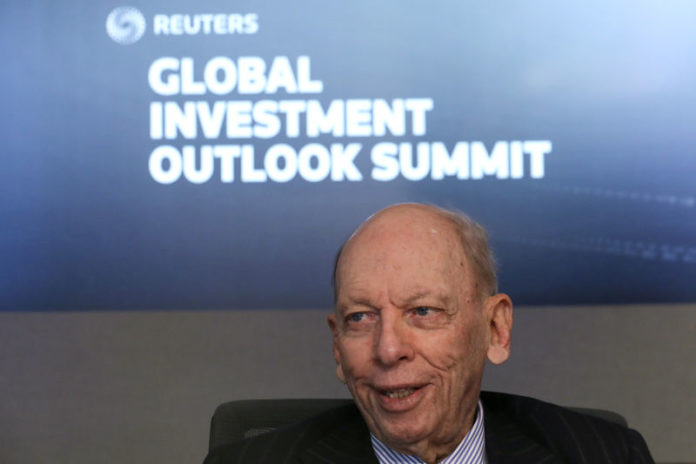 NEW YORK (Reuters) – U.S. stocks have been battered over the last few weeks but a senior executive at Blackstone (NYSE:) Group LP, one of the world’s most influential asset managers, said there is no cause to be overly worried about next year.

“The market is getting oversold,” Byron Wien, vice chairman of the Blackstone Group’s Private Wealth Solutions Group, told the Reuters Global Investment 2019 Outlook Summit in New York on Tuesday. Yet he added, “I am not that pessimistic about next year.”

Speaking a day after the slid around 2 percent when worries about technology companies pulled most everything else lower too, Wien offered an explanation for the recent pullback and a modestly soothing outlook. The S&P is up only slightly for the year.

“Markets thrive on liquidity and we are siphoning it off (through the Federal Reserve’s interest rate tightening),” he said, adding, “that’s a cloud hanging over the markets that there isn’t as much liquidity.”

The sell-off has been fueled in part by worries about trade frictions between the United States and China as well as slowing growth abroad that investors fear might infect the United States.

Still, Wien, who became an industry icon during his two decades as chief U.S. investment strategist at Morgan Stanley (NYSE:), said he is “not pessimistic about next year.”

While earnings growth is expected to slow to 8.8 percent in 2019 from an estimated 24 percent this year according to IBES data from Refinitiv, there are still good companies to buy. He declined to give specific names but said he favors U.S. growth stocks and likes small-cap names.

Wien said he was less inclined to bet on large conglomerates because they often fail to deliver. “I am not a buyer of General Electric (NYSE:) right now,” he said, referring to a company whose share price has been halved since the start of 2018 and which recently ousted its CEO, John Flannery, after just more than a year on the job.

“Being a chief executive is like being a (National Football League) player,” Wien said, referring to a sport known for high turnover of players and head coaches. “You are there for four years, first to clean up the mess of your predecessor and then to make your own messes.”

The octogenarian investor also had suggestions for President Donald Trump, urging him to boast more about the economy and remain silent on more emotionally charged issues like immigration and healthcare.

In the end, Wien said, the Nov. 6 U.S. elections in which the Democrats took control of the House of Representatives marks a favorable outcome for markets. “It will restrain the more extreme moves the Republicans could have made,” he said.

Why did Warren Buffett invest heavily in Coca-Cola (KO) in the late 1980s?