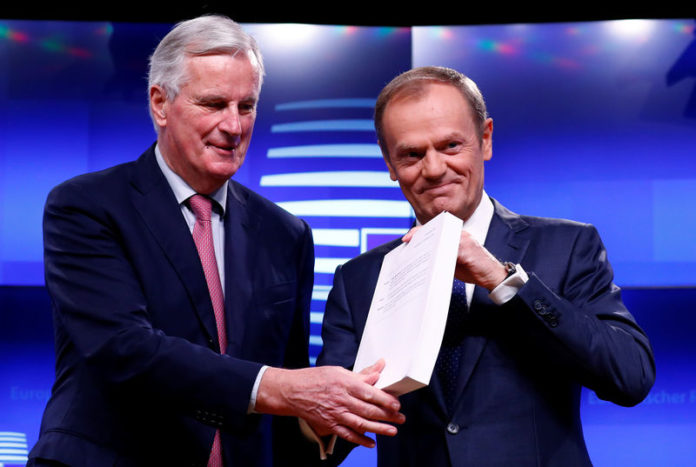 By Jan Strupczewski and Francesco Guarascio

BRUSSELS (Reuters) – European Union states said on Friday that they wanted an “ambitious” future relationship with Britain but that this would not mean frictionless trade, as they met to prepare a text by Nov 25 to accompany the draft Brexit deal.

In London, Prime Minister Theresa May was fighting to save the withdrawal agreement she agreed on with the EU earlier this week, after resignations in her cabinet and with a potential challenge to her Tory party leadership hanging over her.

In Brussels, envoys from the 27 other EU member states met to work on a political declaration on future EU-UK relations that would form a package with the Brexit deal.

EU heads will gather in the Belgian capital on Nov 25 to rubber-stamp both documents, barring British political turmoil sinking the deal – or May herself – by then. Aware of the risks, however, the EU is also not ignoring contingency preparations for a no-deal Brexit.

Full-on negotiations on the future ties between the world’s biggest trading bloc and one of its biggest economies will only start after Britain leaves the EU on March 29, 2019.

Diplomats and officials involved in the Brussels meeting told Reuters that the EU states took turns listing their opinions of what the outline they are now working on should include.

“In the future, everybody wants to have a close partnership with the UK, but there cannot be frictionless trade,” one person said after the closed-door meeting.

“You can strive toward as little friction as possible and everybody is willing to abolish unnecessary hurdles. But at the same time there must be a difference between a third country and a member state.”

While countries like Germany, Ireland and Portugal wanted the text to ring positive, France, Belgium and Spain wanted to stress the EU’s single market integrity.

“There was discussion on how to get the wording right between offering an ambitious relationship but making clear frictionless trade was impossible,” another person said.

Paris leads a group of EU states seeking stronger guarantees that they can get access to Britain’s rich fishing waters after Brexit.

EU envoys stressed the need to ensure a level-playing field in future trade and sought to include articles on coordination with Britain after Brexit on issues ranging from social security to aviation to development.

On areas where they do not agree, they plan to leave things open until the actual negotiations with Britain begin, EU officials said, stressing that the 27 states were on track to agree a joint approach for Nov 25.

“The tone of the meeting was that they want it done, (to) get the ball over the line,” the first diplomat said.

Your New-Construction Home Should Come With A Warranty