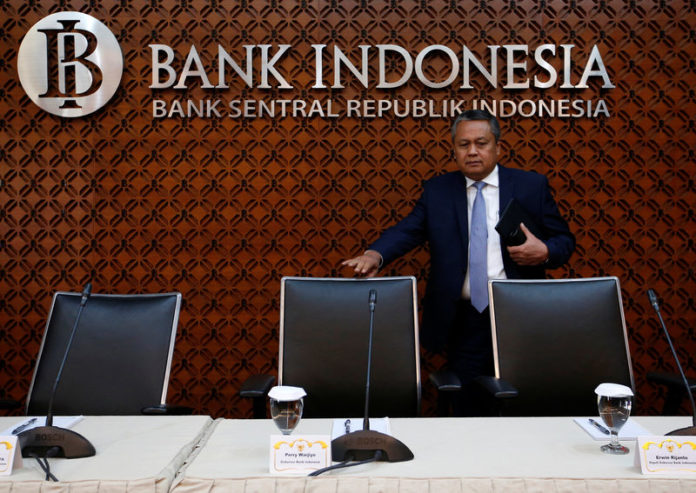 LONDON (Reuters) – Policy makers in Indonesia and The Philippines hiked interest rates on Thursday as central banks in developing countries face the fallout from the strong dollar, struggle to contain inflation and battle to shore up their currencies.

Data compiled by Reuters shows interest rate rises by major emerging market central banks outstripped rate cuts for a sixth straight month in October – the longest such run since the summer of 2011.

Below is a list of emerging market economies that have recently raised interest rates.

INDONESIA – The central bank surprised markets on Nov. 15 by hiking its interest rate for the sixth time this year, stepping up its battle to defend the beleaguered rupiah currency as policymakers struggle to reduce imports and lower a yawning current account deficit.

THE PHILIPPINES – The central bank raised its benchmark interest rates for the fifth straight time on Nov. 15, in a bid to tackle high inflation and bring it back to within its target range next year.

CZECH REPUBLIC – The Czech National Bank delivered its fourth straight rate hike on Nov. 1 to keep ahead of inflation pressures stemming from the European Union’s tight labor market, and it signaled more tightening next year.

CHILE – With an eye on inflation and facing an uptick in domestic activity, central bank policymakers made a surprise decision to hike the benchmark interest rate on Oct. 18 to 2.75 percent, the first interest rate raise in Chile for nearly three years.

KAZAKHSTAN – The central bank delivered a surprise interest rate hike on Oct. 15, raising its benchmark to 9.25 percent. The oil-exporting nation’s central bank had held the rate in the two previous reviews after cutting it four times earlier this year, and said it could tighten further if inflationary risks grow.

UGANDA – Policymakers in Uganda raised the key lending rate by 100 basis points to 10 percent on Oct. 3, the first hike in three years, amid worries over rising inflationary pressures.

JORDAN – The central bank of Jordan raised the interest rate on its various monetary policy instruments by 25 basis points as of Oct. 1. https://

PAKISTAN – Faced with increasing inflationary pressure in the wake of a currency depreciation, the central bank upped interest rates by 100 basis points to 8.5 percent on Sept. 29.

UZBEKISTAN – The central bank raised the key refinancing rate to 16 percent from 14 percent on Sept. 22, citing inflationary pressure and a weaker local currency.

RUSSIA – Russia raised its key rate for the first time since late 2014 on Sept. 14, nudging it up to 7.5 percent from 7.25 percent. The central bank said it was because changes in external conditions observed since its previous meeting had “significantly increased pro-inflationary risks”.

TURKEY – Turkey jacked up its benchmark rate by 625 basis points on Sept. 13 in a move that boosted the lira and may ease investor concern about President Tayyip Erdogan’s influence on monetary policy. The bank raised the benchmark to 24 percent, having now hiked rates by 11.25 percentage points since late April in an attempt to put a floor under the tumbling lira.

UKRAINE – Ukraine’s central bank, grappling with high inflation, raised its key policy rate by half a percentage point on Sept. 6. The hike to 18 percent coincided with the arrival of an International Monetary Fund mission, with time fast running out for Kiev to secure more money under a $17.5 billion assistance program that expires in 2019 but has been frozen since last year.

ARGENTINA – The central bank raised its benchmark rate to 60 percent from 45 percent on Aug. 30 in an effort to stem a slide in the peso – the world’s worst-performing currency this year – and to curb inflation running at 31 percent. The central bank also launched a new currency band on Oct. 1 under a revised International Monetary Fund deal aimed at halting a more than 50 percent drop in the local peso so far in 2018.

INDIA – The Reserve Bank of India raised interest rates for the second straight meeting on Aug. 1, lifting the repo rate to 6.5 percent, but retained its “neutral” stance as it aims to contain inflation while not choking growth.

TRINIDAD AND TOBAGO – The central bank raised the repo rate by 25 basis points to 5.00 percent on June 29.

MEXICO – On June 21, policymakers at the central bank decided unanimously to raise its benchmark interest rate 25 basis points to 7.75 percent to counteract the effects of a peso slump and keep a downward inflation trend on track.

TUNISIA – The central bank raised its key interest rate to 6.75 percent from 5.75 percent on June 13, the second hike in three months, to tackle inflation that has reached the highest level since 1990.

ROMANIA – The central bank has raised rates three times already this year, hiking rates by 25 basis points to 2.50 percent in its last move on May 7 in its battle to curb a sharp jump in inflation.

GEORGIA – The central lifted its key interest rate to 7.25 percent, from 7 percent, on Dec. 13 after its forecasts suggested inflation would overshoot the bank’s 4 percent target.

After the U.S. Federal Reserve’s Sept. 26 decision to raise its target range for the federal funds interest rate by a quarter of a percentage point, the following countries also hiked their rates by 25 bps because their currencies are pegged to the U.S. dollar:

HONG KONG raised the base rate charged through its overnight discount window to 2.5 percent on Sept. 27.

BAHRAIN raised its key policy interest rate to 2.50 percent on the one-week deposit facility, while the overnight deposit rate was raised to 2.25 percent.

Snapchat rolls out new filters, but they are not for humans

China stocks mixed at close of trade; Shanghai Composite up 0.33% By Investing.com

Asus Zenfone Max Pro M1: Is it a better buy than its rivals –...

Xiaomi Recovers from Drop Due to Accounting Errors By Investing.com