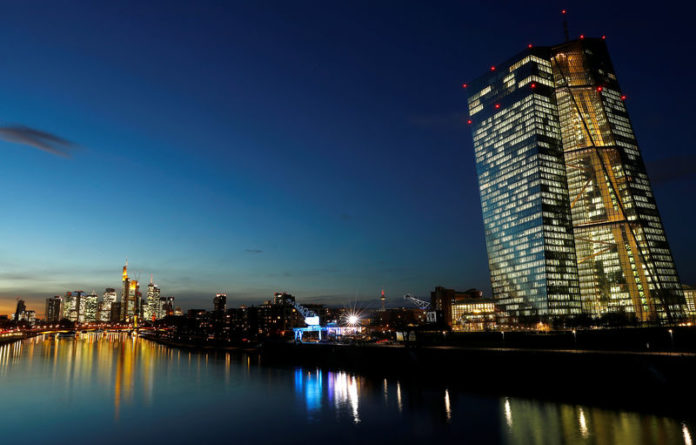 © Reuters. The skyline with its financial district and the headquarters of the European Central Bank (ECB) are photographed in the early evening in Frankfurt

By Balazs Koranyi and Francesco Canepa

FRANKFURT (Reuters) – The European Central Bank is all but certain to formally end its lavish bond purchase scheme on Thursday but will take an increasingly dim view on growth, raising the odds that its next step in removing stimulus will be delayed.

The long-flagged end of bond buys must be irreversible for the sake of credibility, but with France and Italy in political turmoil, a global trade war still looming large and growth slowing, ECB chief Mario Draghi will be keen to emphasize that other forms of support will remain.

“Ending quantitative easing now looks more like the ammunition is running out rather than (being) based on a convincing economic outlook,” Societe Generale (PA:) economist Anatoli Annenkov said.

The ECB’s problem is that growth is weaker than policymakers thought even just weeks ago while the predicted rise in underlying inflation has failed to materialize, putting in doubt some of the bank’s assumptions about the broader economy.

Overall inflation, the ECB’s primary objective, may be near the target now but falling oil prices suggest a dip in the months ahead and a solid rise in wages is not feeding through to prices, leaving the bank with an unexplained disconnect.

Highlighting this complication, the ECB is likely to cut growth and underlying inflation projections and may take a dimmer view on risks, all while Draghi argues that growth is merely falling back to normal after a recent run.

The ECB announces its rate decision at 1245 GMT and Draghi will hold a news conference at 1330 GMT. Economists polled by Reuters unanimously expect unchanged rates.

To take the edge off the bad news, the ECB could also hint at some sweeteners.

It is likely to keep open-ended its time horizon for investing cash from maturing bonds and could discuss fresh long-term loans to banks or whether to push back its first rate hike since 2011.

The bank now sees rates at record lows at least through next summer and some argue that an easy way to keep borrowing costs low is to push out those expectations.

New long-term bank loans are also seen as a relatively low-hanging fruit and Draghi has already raised the prospect of rolling over the ECB’s previous facilities. Sources told Reuters earlier that discussions are in their early stages and no decision is likely until next year.

In another long-awaited set of decisions, the ECB is also due to spell out how it will spend cash from maturing bonds.

While most of these decisions are expected to be technical, sources said the horizon for reinvestments will remain open, another relatively easy step in keeping longer-term borrowing costs down.

Investors will be keen to know whether the ECB aims to adjust its holdings of national government bonds to match its shareholder structure after buying more French, Italian and Spanish debt than the rules of its program dictate.

This “capital key” of the ECB was updated earlier this month, with the shareholdings of Italy and Spain in the central bank falling on account of their underperforming economies during the crisis.

But countries that need the ECB’s support the most could be hurt if it buys less of their debt, so policymakers are likely to opt for a long transition to any change in its portfolio.

To avoid upsetting markets, some policymakers want to maintain the distribution of the ECB’s stock of bonds as it is, taking a snapshot on Dec. 31, sources have told Reuters.

Others, particularly countries that have been underbought, are advocating rigorously applying the shareholder structure, be it the old or new one, and adjusting this stock over time.

All of these steps are relatively modest and will be effective only if growth stabilizes at a fast enough pace to generate inflation.

“We have seen this “fingers crossed” attitude in the ECB’s communication for some months now. Given the limitations of the toolbox, it is understandable, even if it is not very reassuring for investors,” Bank of America Merrill Lynch (NYSE:) said.

Banks Could Enter Bear Markets in 2019

All phones in India to have 4G by 2020, says Mukesh Ambani

I’m 81 and signed over my life savings to my son to manage my...

New-home sales fall to a near 3-year low, inventory surges as...