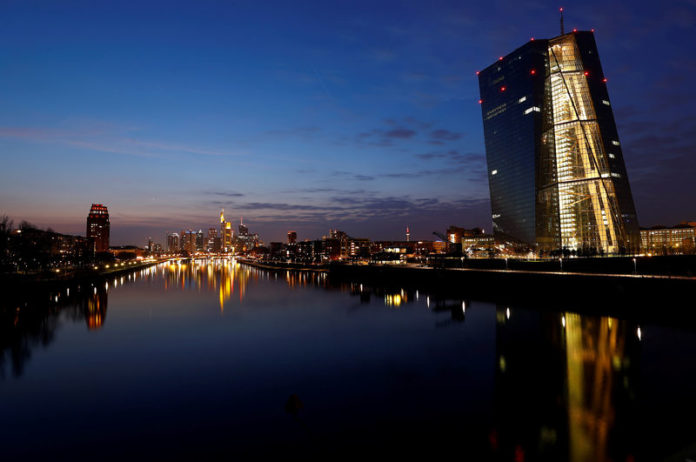 © Reuters. FILE PHOTO: The headquarters of the European Central Bank and the Frankfurt skyline with its financial district are photographed on early evening in Frankfurt

FRANKFURT (Reuters) – European Central Bank policymakers stressed at their meeting in October the need to reaffirm plans to dial back monetary stimulus even as some saw growing risks to the economy, minutes showed on Thursday.

Investors have been questioning the ECB’s resolve to follow through on plans to stop its bond purchases at the end of the year and raise interest rates sometime after next summer.

ECB rate-setters acknowledged the disappointing economic data on Oct 24-25 but took the view that the picture was still one of widespread economic growth and accelerating inflation.

“It was important to emphasize that the incoming information, while somewhat weaker than expected, remained overall consistent with an ongoing broad-based expansion of the euro area economy and gradually rising inflation,” the ECB said in the minutes of the meeting.

The central bank kept rates at record lows at the meeting and repeated its intention to stop adding to its 2.6 trillion euros ($2.97 trillion) of bonds at the end of the year in light of higher inflation. Calls for adopting a more cautious outlook were isolated.

“While there was broad agreement that at present the risks to growth could still be considered to be balanced overall, a remark was made that a number of arguments pointed towards risks to the growth outlook tilting to the downside,” the ECB said in the accounts.

And the prospect of a new round of cheap, multi-year loans to banks, known as targeted long-term refinancing operations (TLTROs), was barely broached.

With the latest TLTRO starting to mature in 2020, ECB President Mario Draghi said two policymakers had brought up the topic at the October meeting.

“The remark was made that the maturity of some of the targeted longer-term refinancing operations would fall below one year in the course of the next year, which could impact the evolution of excess liquidity and might affect banks’ liquidity position,” the ECB said.

Sources have told Reuters no decision on the matter is expected in December, either.

That may prove painful in countries such as Italy, where banks have to repay some 250 billion euros worth of TLTRO money amid rising market rates and an unfavorable political situation.

PSU bank fraud: SBI tops with most employees caught in the act; next on...

How Huawei is betting big on Artificial Intelligence

Twilio Stock Breaks Out to Retest Prior Highs