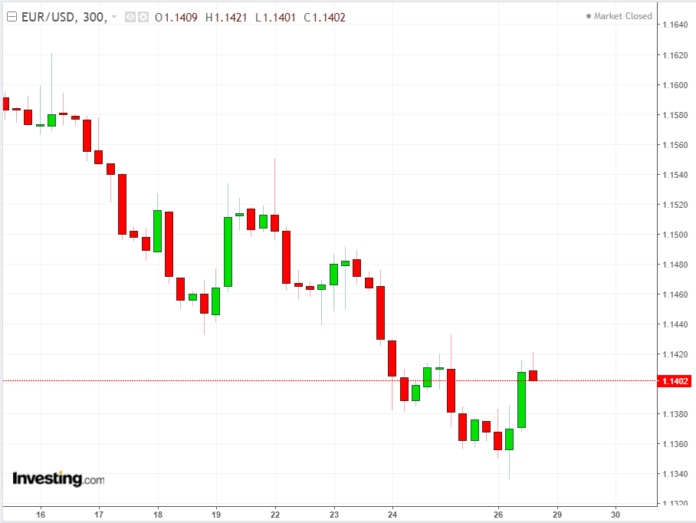 European Central Bank (ECB) President Mario Draghi stopped short of simply saying “trust me” at his Thursday, following the meeting of the governing council of the ECB. But he did try to defuse some of the economic tensions in Europe by expressing his personal confidence that reasonable solutions would be found for the Italian budget standoff and even the Brexit stalemate.

Draghi, the former Banca d’Italia, central governor and perhaps future president of Italy, said of Rome’s budget disagreement with Brussels: “I’m personally – and that’s a personal perception so take it for what it’s worth – I am confident that an agreement will be found.”

However, he perhaps signaled where his sympathies might lie when another questioner asked him whether the commission’s stance on Italy might be considered counterproductive, especially with European elections next year. “I think you’re asking very good and very serious questions,” Draghi said in response, “but I am not the one who should answer these questions; I think you should ask them to the commissioners.”

He repeated earlier comments that there was so far no evidence of contagion as yields on Italian government bonds shot up. And his willingness to share his personal perceptions came to an abrupt halt when he was asked whether he had some sympathy for Rome’s point of view that their budget deficit is within the 3-percent limit of the stability pact even though the European Commission wants it to be lower to reduce the country’s debt.

The “question is whether I have sympathy for this or that,” he said. “I don’t know what to respond with that. We have the commission; the commission is the ultimate guardian of the Stability and Growth Pact, not the ECB.”

As the deadline for Brexit nears without a transition agreement, various concerns about trading and clearing are coming to the fore. Draghi, who is also the former chairman of the ECB’s Financial Stability Board said, “By and large, I’m still confident that a good common-sense solution will be found where financial stability risks will be minimized.”

Nonetheless, he added, if the deadline grows nearer without an accord, the private sector should assume there will be a hard Brexit and prepare accordingly. “I wouldn’t call it necessarily [a] big financial stability risk,” he said, “but certainly financial uneasiness in markets and intermediaries and CCPs [central counterparties] and their member banks and so on.”

Tightening Into Year-End, But With An Accommodative Stance

With regard to monetary policy itself, Draghi had a very clear message. The ECB will proceed with its plan to phase out asset purchases by the end of the year, but maintain an accommodative stance by maintaining the current level of investment. It will also stick to its plan of not considering a hike in interest rates until the end of next summer.

The council noted “a somewhat weaker momentum” in economic growth, but considered most of it could be due to one-off situations like the slowdown in the German auto industry due to delays in implementing new emissions certification procedures. To emphasize this stance, Draghi repeated a statement from his introductory remarks in response to a question about keeping money loose enough to bring close to the 2-percent target amid increasing geopolitical risks. He said again:

“This support will continue to be provided by the net asset purchases until the end of the year, by the sizeable stock of acquired assets and the associated reinvestments, and by our enhanced forward guidance on the key ECB interest rates.”

If the situation with Italy worsened and plunging bond prices impaired the capital of banks, Draghi noted that the ECB has the tool of outright monetary purchases (OMT), a facility to purchase bonds of a specific country under certain conditions that was introduced during the euro debt crisis of 2012 but never used. The very existence of the OMTs has so far been sufficient to keep spreads from getting too wide.

When asked about it, he said the council has not even discussed the upcoming revision of the so-called capital key, which determines the capital participation of eurozone members in the ECB and the proportion of government bonds the central bank can buy in its asset purchase program. The revision is likely to increase Germany’s proportion and reduce that of Italy, but Draghi said the bank would have no reason to abandon the capital key as the measure for asset purchases.

Analysts concluded that the ECB is unlikely to resume quantitative easing even if economic conditions worsen. OMT is available as a tool for specific countries and it can put off raising interest rates if necessary.

The dovish tenor of Draghi’s remarks led to lower yields in European bonds and some weakness in the .

In the meantime, the report of higher-than-expected US in the third quarter pushed up Treasury yields. Analysts said the euro will remain under pressure over the medium term as the interest differential with the US widens.

The US and China are giving off bad signals ahead of a crucial meeting...

Why the yuan is unimpressed with China’s fiscal easing promises

Rs 99 only! These Nokia smartphones can be yours – Here...

Investors flee bonds and stocks in turbulent week for growth and...