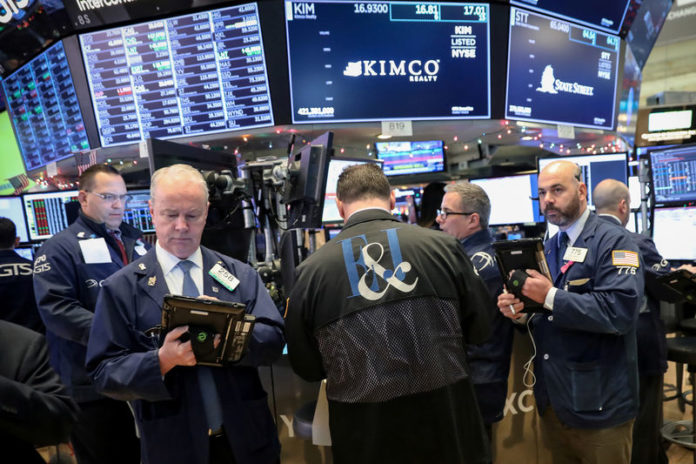 (Reuters) – Wall Street dropped on Monday, led by Apple Inc (NASDAQ:), financials and healthcare stocks, falling further after its biggest slide since March last week on worries over global growth, the China-U.S. trade war and uncertainty over the Brexit deal.

The benchmark and the blue-chip , already in the red for the year after last week’s slide of more than 4.5 percent, fell another 0.5-0.6 percent, while the Nasdaq moved marginally higher.

Apple fell 1.7 percent after Qualcomm (NASDAQ:) Inc said it had won a preliminary order from a Chinese court banning the import and sale of several iPhone models in China due to patent violations.

Ten of the 11 major S&P sectors were lower, led by a 1.4-percent drop in financials on expectations that the Federal Reserve would be less aggressive with monetary policy next year.

“What you are looking at is drivers. Not a whole lot has changed from last week, but what has changed is the value of equities,” said Art Hogan, chief market strategist at B. Riley FBR in New York.

“We don’t have a whole lot of catalysts this week. That’s why we would pay more attention than not to news from the administration on trade and the Huawei CFO.”

Wall Street continues to be dogged by signs of cooling growth and worries that escalating tensions between the United States and China could scuttle their fragile trade truce.

Washington has set a March 1 “hard deadline” to successfully wrap up talks with Beijing over their trade spat, failing which a higher tariff rate will kick in, U.S. Trade Representative Robert Lighthizer said on Sunday.

That comes when investors are fretting that the arrest of a top Huawei Technologies Co Ltd [HWT.UL] executive at the behest of the United States could inflame tensions with China, though both the White House and Chinese state media have said the arrest and trade talks are separate events.

British Prime Minister Theresa May on Monday made an abrupt decision to pull a parliamentary vote, scheduled for Tuesday, on her Brexit deal.

Economy glides, but fading ‘Trump bump’ may cast shadow over 2020 race By Reuters

Amazon to allow Apple Music on its Echo speakers By Reuters