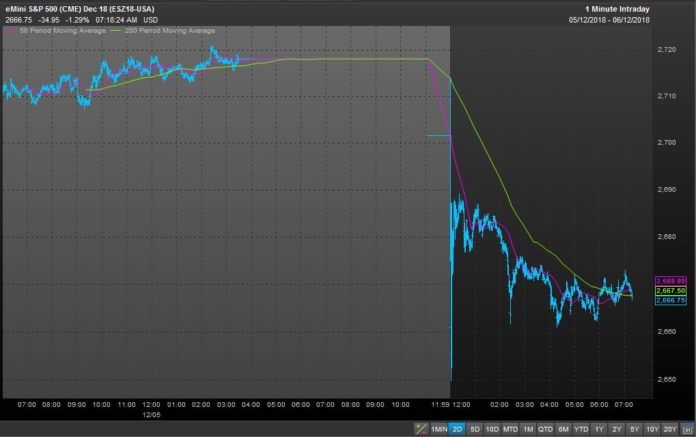 U.S. stock futures tumbled Thursday, with selling so intense at one point that circuit breakers were triggered, after the arrest of a Huawei executive reignited trade worries that helped drag equities to their worst session since early October on Tuesday.

The market was closed Wednesday to mark a national day of mourning for former President George H.W. Bush, who died Friday at 94.

How are the benchmarks trading?


were down 396 points, or 1.6%, at 24,649, though they were off overnight lows, when Dow futures fell as much 487 points, before recovering some of those losses before the bell Thursday.

On Tuesday, the Dow

While regular trading was closed Wednesday, there was a shortened session of electronic trading for stock-index futures that showed Dow futures bouncing 100 points. When futures reopened Thursday, the drop was so severe on S&P 500 futures that the Chicago Mercantile Exchange triggered circuit breakers to avoid worse losses. Those futures spiked down to 2,659, a drop of 1.9% before the CME stopped trading briefly to try to calm the market, said Chris Weston, head of research at Pepperstone.

Investors were rattled by news that the Canadian authorities had arrested Meng Wanzhou, the chief financial officer of Huawei Technologies, at the request of U.S. authorities for allegedly violating sanctions against Iran. The arrest, which was made on Dec. 1, comes as the U.S. has taken several steps to restrict the Chinese technology giant, trying to persuade international allies to do the same.

China authorities reacted furiously, with the spokesperson of the Chinese Embassy in Canada demanding the release of the Huawei executive. “At the request of the U.S. side, the Canadian side arrested a Chinese citizen not violating any American or Canadian law,” said a statement on its website. Huawei itself said it was “unaware of any wrongdoing by Ms. Meng,” in a statement released on Twitter.

The latest development comes amid an already shaky backdrop for trade relations between the U.S. and China. Doubts surrounding the weekend trade moratorium at the G-20 summit between the two sides and ominous developments in the bond market drove sharp losses for stocks Tuesday.

Market participants are also paying close attention to a Dec. 5-6 meeting of the Organization of the Petroleum Exporting Countries in Vienna. Crude-oil prices renewed their descent after the Saudi energy minister proposed a smaller-than-expected cut to production, but added that the oil cartel hadn’t yet agreed to any production declines.

The recent 30% drop in oil prices from their October highs is being interpreted by some market participants as a sign of slowing global growth, given oil’s central role as an input for a range of economic activity.

What data and speeches are in focus?

What are the strategists saying?

“The timing of the arrest is key here. Markets are already incredibly nervous over slowing economic growth thanks to the inverted U.S. yield curve. Relations between the U.S. and China were supposed to be on the mend after a productive G-20. However, the arrest has the potential to shatter very fragile U.S.—Sino relations which will weigh further on global trade and growth concerns,” said Jasper Lawler, head of research at London Capital Group, in a note to clients.

And “despite recent heavy selloffs, the bottom isn’t in sight and the markets have further to fall. The big swings of late are representative of a very jittery market,” added Lawler.

Read: December historically is the most wonderful time of the year for stocks

What stocks are in focus?

Tech stock futures are under pressure before the bell Thursday, with Apple Inc.

Energy exploration firms are also selling off in premarket trade, with TechnipFMC Plc


as a leading loser among S&P 500 firms before the bell Thursday. The stock has fallen more than 8% Thursday.


are falling more than 9% in premarket trade Thursday, hitting thirteen-month lows, after the retailer cut its earnings and margin outlook for the full year 2018.

What are other markets doing?

Asian stocks fell sharply across the board, with the bulk of losses hitting tech stocks, and the Hong Kong Hang Seng Index


also traded lower across the board.

Ugly Markets Might Contaminate the U.S. Economy By Bloomberg