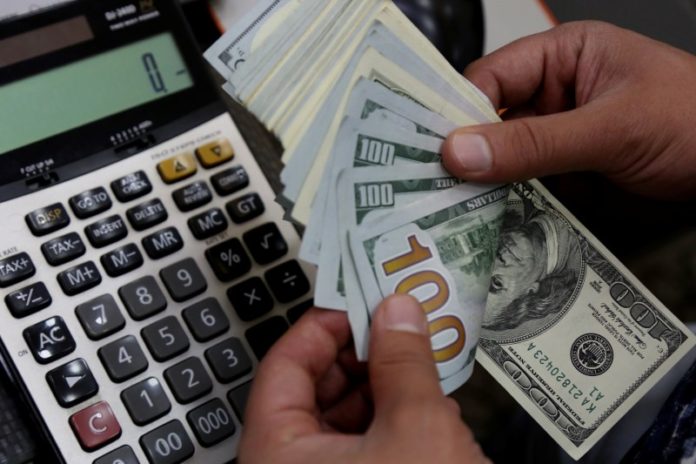 SINGAPORE (Reuters) – The dollar weakened across the board on Monday as investor demand for riskier assets rose after China and the U.S. agreed to a ceasefire in their trade war that has shaken global markets.

The White House said on Saturday that President Donald Trump told China’s President Xi Jinping at the G20 talks in Argentina that he would not raise tariffs on $200 billion of Chinese goods to 25 percent on Jan. 1 as previously announced.

China and United States will attempt to bridge their differences via new talks aimed at reaching a deal within 90 days.

Riskier currencies such as the Australian dollar

“The trade truce is definitely risk positive for the markets…we expect dollar safe haven buying to fade and riskier currencies such as the and to scale higher,” said Rodrigo Catril, senior currency strategist at NAB.

Catril noted that crosses such as the Aussie/yen and kiwi/yen are likely to see further upside as currency traders react to the truce between the world’s two largest economies.

The dollar lost 0.44 percent versus the

The greenback lost 0.8 percent versus the South African rand

However, some analysts warned many issues had to be resolved for risk sentiment to stay positive in the medium term.

“Ultimately, it remains a high order for China to fulfill the U.S. demands on structural issues…at a time when the major issues that the U.S. has raised represent a challenge to China’s rise, a long-lasting and meaningful de-escalation remains very challenging,” said Daniel Been, head of currency research at ANZ.

Apart from trade, investor focus will also return to the U.S. monetary policy, with the Federal Reserve expected to raise interest rates by 25 basis points later in December, which would be its fourth rate hike this year.

“The developments over the weekend will give the Fed more confidence to raise rates in 2019,” said Michael McCarthy, chief market strategist at CMC markets.

The dollar had come under pressure last week when the market took comments by Federal Reserve Chair Jerome Powell as hinting at a slower pace of rate hikes.

Powell is scheduled to testify before a congressional Joint Economic Committee later this week.

“We believe that Powell has simply toned down his hawkish tilt seen in October, with the Fed on track to deliver a hike, the fourth this year, at the FOMC meeting on 19 December, as well as another four increases in 2019,” Philip Wee, currency strategist at DBS, said in a note.

The British pound traded relatively unchanged versus the dollar at $1.2760. Sterling has posted losses for three consecutive weeks as traders bet that British Prime Minister Theresa May will not be able to pass her Brexit deal through Parliament on Dec. 11.

As the credit cake collapses, this is where investors should put their dough

Indonesia stocks lower at close of trade; IDX Composite Index down 0.84% By Investing.com

Used private jets from China are landing with U.S. buyers By...