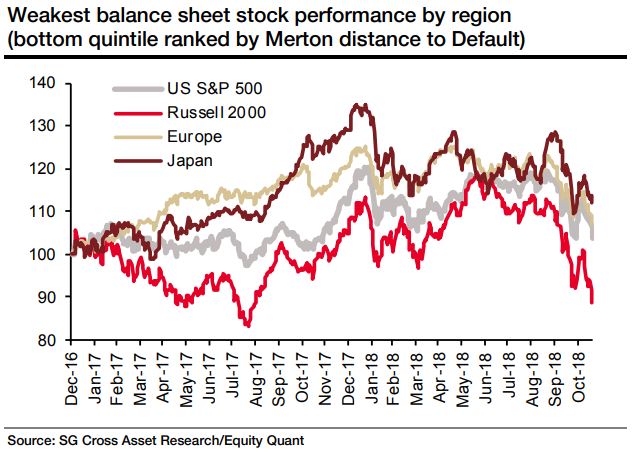 As corporate debt concerns come to a head, investors have dumped the stocks of firms with the worst balance sheets, a trend that is likely to intensify next year.

“In a declining market, as any risk model will tell you, balance sheet risk becomes the most important driver of equity returns,” said Andrew Lapthorne, head of quantitative equity research for Societe Generale, in a research note from Monday.

“Given the debt build-up, we expect this to be all the more amplified this time around,” said Lapthorne.

The Federal Reserve’s steady pace of rate hikes have stoked those concerns as investors worry a Fed-led tightening of credit conditions will raise the risk of a recession that could hammer corporate earnings. The one-two punch of higher borrowing costs and weaker debt-servicing capabilities could slam shares of firms lacking robust finances.

See: These 5 charts warn that the U.S. corporate debt party is getting out of hand

Lapthorne and other Societe Generale analysts ranked companies based on the Merton model, which spits out the market-based probability of a company’s default and thus gives an assessment of how investors perceive a firm’s financial health.

In the chart below, Lapthorne’s analysis culls 20% of stocks with the weakest balance sheets from key U.S. equity benchmarks and compares them against other indexes.

He found that the bottom fifth of such shares tended to struggle against their peers and other benchmark indexes abroad.


underperformance against the broad-based S&P 500 in 2018. Composed of firms carrying debt burdens heftier than their large-cap brethren, the small-cap index is down more than 9% year-to-date, while the S&P 500


was down by 4.4% over the same period, FactSet data shows.

“As long as interest rates weren’t going up and, more importantly, asset prices were continuing to rise, balance sheet concerns could be ignored,” said Lapthorne.

Bubbling fears over leverage have recently reversed the earlier outperformance of small-cap stocks this year. Investors had rushed into such shares for most of 2018 because most of their revenues came from domestic sources, immunizing them from fears that a potential trade war would take a toll on businesses influenced by the vagaries of global growth. Through June, the Russell 2000 was up more than 11% year-to-date, even as the S&P 500 was up roughly 3.5% over the same period.

Read: Small-cap stocks are down, but not necessarily out, analysts say

To be sure, concerns over corporate credit haven’t led to a substantial increase in borrowing costs.

Many firms scarred by the financial crisis rolled over their bonds when interest rates were low in an act of prudent fiscal management. That has kept the average interest coverage ratio for investment-grade corporations stable since the Fed carried out its first rate hike of the tightening cycle in 2015, according to HSBC.

Still, analysts worry highly leveraged businesses will eventually have to refinance their maturing bonds. And when they do, it will happen against a backdrop of higher rates, raising the burden of paying down their debts.

Dow tumbles by about 400 points, putting blue chips on the verge of erasing...

UFC Want Me To Lose In Robbie Lawler Fight

Video: What the #MeToo movement means for investors