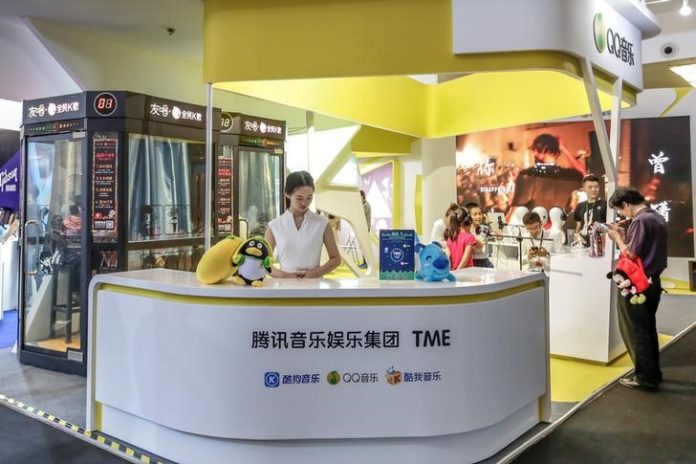 © Reuters. FILE PHOTO: Visitors are seen at a booth of Tencent Music Entertainment at the Beijing Music and Life Show in Beijing

The streaming music giant, which has more than 800 million monthly users, had initially pencilled in an October launch for a U.S. initial public offering (IPO) of up to $2 billion, but decided last month to delay until November in the hope that markets would settle.

Now, the last mega U.S. IPO of the year faces a still-weak mood towards tech stocks and ongoing market jitters ahead of next week’s G20 meeting in Buenos Aires.

Indeed, TME and its advisers have discussed pushing the deal into early 2019, according to two sources involved. No decision has yet been made by the company, they added.

“Of course they want to get the deal done within the year, but meanwhile, they don’t want to rush for the listing. What they care about a lot is (getting) the right valuation, rather than the fast pace of the listing,” said one person involved.

Another source also emphasized the importance of the valuation and said of the market conditions: “We continue to monitor.”

TME declined to comment. The sources declined to be named because the deliberations are not public.

December is not considered an ideal month for large New York IPOs. While Hong Kong and Tokyo often remain busy well into year end – the $21 billion Tokyo IPO of SoftBank’s Japanese telecoms business is due to debut on December 19 – New York traditionally slows late in the year.

In the past decade, U.S. markets have hosted just three IPOs of more than $1 billion in December and the latest of those priced on Dec. 11, according to Refinitiv data.

Part of the thinking behind waiting for January is that big investors, weary of this year’s rollercoaster ride would, after the year-end break, be more receptive to fresh deals that could count towards their 2019 performance.

Bankers are also paid on a calendar-year basis and with 2018 the strongest in three years, with $177 billion raised globally, most will have already surpassed their annual targets.

The progress of TME’s deal mirrors the fortunes of the world’s IPO markets this year, where an early-year rally boosted expectations for IPO valuations, only to run into weakening markets by February as investors worried about rising U.S. -China trade tensions and rising interest rates.

TME appointed banks for its deal in May, when hopes were strong that markets would steady or even recover. Sources at the time suggested it could raise up to $4 billion in what would have been the biggest Chinese IPO in the United States this year. In September, the amount sought was cut to about $2 billion. [D-REUTERSONLREP-T001/Ie7b2a7b0bbda11e88ba1cf97b4c0be9a]

In total, Chinese companies have raised $7.9 billion in U.S. IPOs this year, second only to 2014, when they raised $29 billion, boosted by Alibaba’s record-breaking $25 billion IPO.

Investor interest in TME has been piqued by its vast user base and its profitability compared with other streaming services such as Spotify (N:), which sent its shares tumbling earlier this month when it promised to continue sacrificing profit margins in order to invest heavily.

The Swedish streaming service, in which TME has a 7.5 percent stake, initially outperformed the market after its own IPO in April, but it is now trading 2 percent below its initial reference price and down 34 percent from its July peak, underperforming the tech-heavy Nasdaq Composite () which is flat over the same period.

Tencent (HK:), the 58 percent owner of TME, has fallen 31 percent since Spotify floated.

The Bank of England is sounding the alarm on a quiet corner of the...

Chart Of The Day: Small Caps Headed For A Rebound