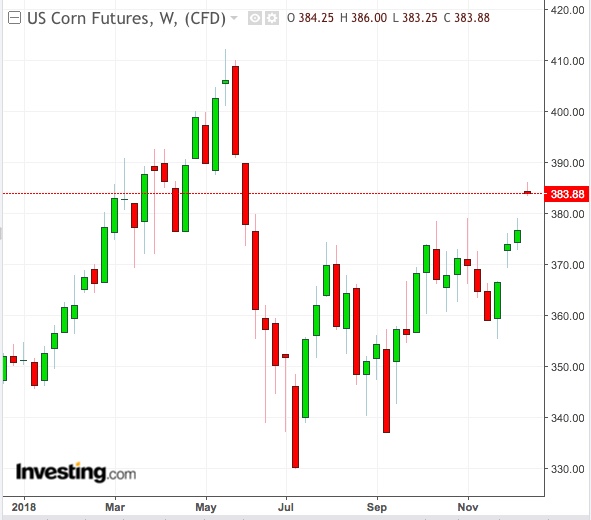 In a year where almost every commodity from to and went from boom to bust, is the only one that has gained in 10 of the past 12 months.

While it may win a medal for consistency, the grain’s outperformance still hasn’t delivered blockbuster returns and its gains on the year remain short of the double digit mark.

At Monday’s settlement, corn futures on the Chicago Mercantile Exchange showed an annual gain of just over 9 percent, compared with the 25 percent for , which posted a more erratic record through the year (desktop users, click here and go to “performance” to see all commodity returns for 2018).

Going into 2019, analysts think corn would be a better sell than a buy. Shawn Hackett of Hackett Financial Advisors, an agricultural markets advisory in Boca Raton, Florida, is convinced investors should short corn now in order to have a chance of making money in the new year.

“It is hard to see the corn market exhibiting substantial upside form here unless Mother Nature were to pay a nasty visit in South America or if the wheat market were to take off. We are bullish wheat but still feel corn would underperform in that scenario.”

Corn, which began the year at $3.5075 per bushel, hit a two-year high of $4.1225 in May before consolidating to current levels of around $3.84 on the benchmark March futures contract.

“Smart money in the corn market continues to see selling and is traveling down a more bearish path. A combined smart money sell signal is very close to being triggered. Prices are pressed against major overhead resistance near $390 basis the March contract.”

This Year’s Massive Export Demand May Not Recur

According to Hackett, the run-up was primarily driven by massive export demand for US-grown corn, owing to poor crops in South America and the EU. He said:

“This has occurred at time when US farmers tend to lock corn up in the bin until the new year, requiring higher prices to force sales.”

Hackett said that although the export trend could continue a while longer,

“So long as South American corn production looks as good as it does now, we will start to see new fresh supplies competing for global export market share in a few months.”

“This deceleration in US exports will come at a time that talk will be circling around large increases in US corn planted acres for the 2019 growing season. We may be close to the first good opportunity to sell corn here. As always, we will wait patiently for a formal smart money sell signal to be triggered. Bottom-line … Get ready to sell corn.”

A Corrective Pullback Could Lead To ‘Nice’ Buying Opportunity

Dan Hueber, who authors the Hueber Report out of St. Charles, Illinois, has a similar view:

“I am of the opinion that corn is due for a corrective pullback and if such a move materializes into early January, we could be presented with a nice purchase opportunity at that time.”

Jack Scoville, grains analyst at The Price Futures Group brokerage in Chicago, noted that corn seemed to find increased selling interest whenever prices approached $3.90 per bushel on the March contract.

US Supply-Demand For Corn Not Too Thrilling

Scoville said while the latest weekly export demand numbers for corn from the US Department of Agriculture were supportive, they were somewhat disappointing too, falling short of the million ton threshold. Likewise, supply data published by the USDA also provided no surprises, with production from major competing centers, including Brazil, Argentina and Russia, remaining subdued amid benign weather.

“The US should remain the dominant seller in the world Corn and feed grains market for the next several months due to limited competition from South America and the Black Sea area.”

Some, like Mike Seery of Seery Futures in Plainfield, Illinois, are more bullish on corn going into 2019. Said Seery:

“I’m certainly not recommending any type of bearish position, with the next major resistance at the $3.90 level. I think there’s a possibility corn could trade in the low $4 range soon.”

Seery reasons that with the market above its 100-Day Moving Average, the immediate trend was higher:

“My only concern is that there is a price gap that was created between $3.78 / $3.80, as I think that will be filled before a true bullish trend will develop.”

Opel/Vauxhall to make an electric van in 2020 By Reuters

Claire’s Is Entering A New Chapter In Life: Bankruptcy

Analyst who predicted the 2008 crash, warns of bubble brewing in...

How dominant companies can be a drag on the US economic...