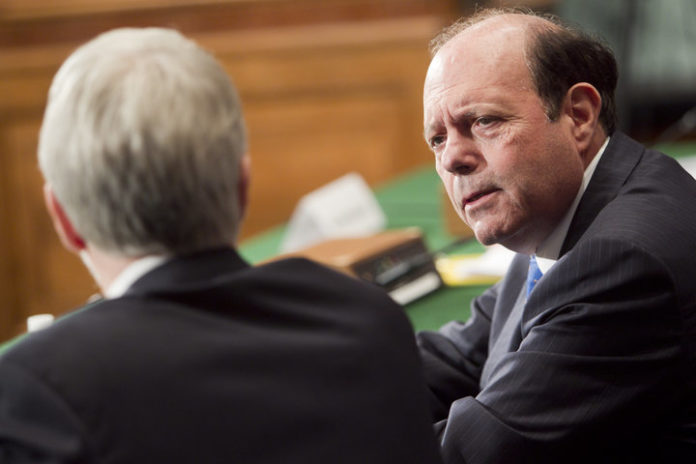 A little over a year ago, American commerce quietly passed a techno-dystopian landmark when IBM ― one of the most prestigious and storied computer companies ― undertook a new project: automating the revolving door between Wall Street and Washington.

IBM’s acquisition of Promontory Financial Group, a consulting firm recognized in Washington as a landing pad for top officials from the Federal Reserve, the Securities and Exchange Commission and other government agencies, went largely overlooked in the news churn surrounding the 2016 election. Promontory’s founder, former bank regulator Eugene Ludwig, pays top dollar to bring in public-sector talent and put it to work on behalf of the banking industry.

The company touts its expertise in helping firms navigate a complex regulatory landscape, but the business often has more to do with the mystical intangibles of corporate reputation than the technical precision of regulatory codes. Banks caught laundering money for dictators or illegally foreclosing on families call Ludwig, agree to pay him large amounts of money, and through the magic of Washington emerge with their prestige refreshed.

In the aftermath of the financial crisis, Promontory has had no shortage of clients. Ludwig reportedly pays himself more than $30 million a year, well ahead of what either JPMorgan Chase CEO Jamie Dimon or Goldman Sachs CEO Lloyd Blankfein take home.

IBM, which has been steadily expanding its corporate consulting business over the past decade, wanted to assimilate Ludwig’s operation into Watson, its flagship artificial intelligence system.

“Promontory’s experts are unsurpassed in this field,” IBM’s Bridget van Kralingen, a senior vice president, said when the deal was announced. “They will teach Watson and Watson, in turn, will extend and enhance their expertise.”

The good news for American democracy is that IBM made a mistake. Influence peddling is a uniquely robot-proof line of work. It relies not on hard data or generalizable patterns of thought, but on relationships and attitudes that no algorithm can emulate or predict.

The bad news is that Congress is already on corruption autopilot, even without machine learning. Beginning in 2015, a bipartisan coalition of ostensibly free-market Republicans, including Rep. Tom Emmer (R-Minn.) and Sen. Jerry Moran (R-Kansas), teamed up with social-justice Democrats, including Rep. Gwen Moore (D-Wis.) and Sen. Mark Warner (D-Va.), on legislation that would shower new riches on Ludwig’s influence empire and a few enterprises like it.

This year, similar legislation has the support of 10 senators from each party, almost guaranteeing passage. The proposal would override federal regulators on a complex deposit insurance rule, thus bringing more money into a niche market where Ludwig himself is the dominant player.

This congressional perk won’t spark the next subprime meltdown or erase anyone’s savings, but it will pad the profits of a prominent Washingtonian by making small banks a little bit riskier. For all the bitter partisan warfare over health care and taxes, Democrats and Republicans can still find common ground on some basic principles of American industry.

When Ludwig founded his consulting firm, he set up a side operation sharing key personnel ― the similarly named Promontory Interfinancial Network. The company makes it easier for rich people to take advantage of deposit insurance from the federal government, and harvests a small fee for its service. Deposit insurance is the reason you don’t lose money if your bank fails. Most families don’t have to worry about it, since the government automatically guarantees every penny of bank accounts up to $250,000, and very few Americans have more money than that lying around. More than half of Americans have less than $1,000 in their savings account, and the average checking account balance is about $3,600.

But if you have, say, $1 million that you don’t want tied up in the stock market, and you don’t want to spend your Saturdays working out four or five separate accounts with different banks, Promontory’s Certificate of Deposit Account Registry Service lets you deal with a single institution, which can spread your cash across a network of different banks on your behalf, while allowing you to maintain what looks to you like a single omnibus account.

There’s nothing inherently devious about the service. But federal regulators see it as a riskier way for banks to fund their operations. Banks can become dependent on the health of a complex deposit network, in which a single customer can instantly drain large accounts at several different institutions.

To protect taxpayers who are ultimately on the hook for deposits that disappear in a bank failure, federal regulators apply some restrictions on these so-called reciprocal deposits. Only banks with healthy capital cushions can rely on them, and there are limits to the interest rates banks can offer to attract them.

A few other firms exist in the reciprocal deposit space, but it’s really Promontory’s game. The company’s website touts 800,000 “bank-to-bank connections” each year, and more than 2,700 banks participate in its network, according to a company spokesman. Promontory doesn’t like the Federal Deposit Insurance Corp. discouraging banks with capital troubles from using its product. And it is spending an enormous amount of money on Capitol Hill trying to get around them.

In 2016, according to federal lobbying disclosure forms, Promontory spent more than $1.5 million through eight different lobbying firms, followed by over $1.25 million in the first nine months of 2017. To put that in perspective, the National Bankers Association ― a trade group that also supports the bill ― spent a total of $95,000 on lobbying in 2017, on everything from the GOP tax bill to residual issues from the 2008 government bailout.

Promontory insists that all of this energy is going to help community banks and local small businesses. “It’s not just us who are working on the bill,” notes Promontory Interfinancial spokesman Phil Battey. “It is of great importance to community bankers.”

In September, National Urban League CEO Marc Morial sent a letter to the top Democrat and Republican on the Senate Banking Committee, urging both to support the Promontory legislation, arguing that the measure will help minority-owned banks access funding. The National Bankers Association, which represents banks owned by women and minorities, also argued the legislation would encourage economic growth in “economically distressed communities.”

For their troubles, Warner introduced legislation allowing banks that lose their official “well-capitalized” regulatory status to keep accepting reciprocal deposits, and easing restrictions on what interest rates they can pay. When Warner cut a deal with Republicans in the fall to loosen a slate of other rules on much bigger banks (those with up to $250 billion in assets), they included the Promontory bill in the package. With 10 Democrats and the Trump administration on board, it’s only a matter of time before the bill becomes law and Promontory’s business expands.

“This will help colleges and other nonprofits who want to invest in their communities by allowing them to keep more of their money in local community banks and credit unions,” Warner spokeswoman Rachel Cohen told HuffPost. “Smaller financial institutions are lifelines to Main Street businesses and families across rural America, which is the one and only reason Senator Warner is supporting legislation that will make it easier for them to lend while still making sure that big Wall Street banks remain subject to the Dodd-Frank regulations he helped write after the financial crisis.”

But increasing deposits at small banks ― particularly at banks with capital problems ― doesn’t do much to increase lending or investment, according to University of Georgia Law professor Mehrsa Baradaran, author of The Color Of Money: Black Banks And The Racial Wealth Gap.

“Deposits aren’t really the thing that make or break these communities,” Baradaran told HuffPost. “It’s really common to use community banks, minority owned banks, community development banks as a Trojan Horse for whatever the actual power brokers in Washington want to do.”

Moran, Moore and Emmer declined to comment. Promontory spokesman Battey told HuffPost the bill “would improve the ability of community banks to offer reciprocal deposits and thus to fund community-based local lending,” which is why it “has received broad bipartisan support and endorsements from community bankers and organizations across America.”

Battey added: “It would be a serious error of fact to say that Promontory Interfinancial Network is about to receive any sort of ‘windfall’ from the reciprocal deposits legislation.” He acknowledged the bill would bring more business Promontory’s way.

The Promontory bill isn’t going to destroy the economy or set off the next great American banking panic. At worst, it will accelerate the failure of some smaller, badly managed banks, letting them utilize more expensive and less stable funding whenever their capital base collapses. Compared with the tax bill and the Obamacare repeal effort that dominated Congress in 2017, doing Ludwig a favor is pretty small potatoes. But the fact that it’s on the legislative agenda with bipartisan support says a great deal about who matters on Capitol Hill.

Challenges of electric mobility: Metal-air tech can emerge as a viable...