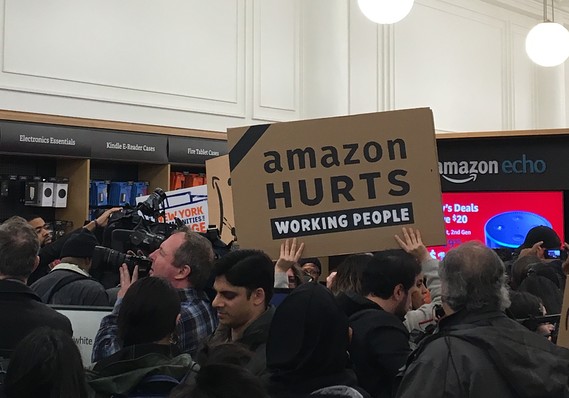 While millions of shoppers headed online searching for Cyber Monday deals, activists in New York City rallied against internet giant Amazon’s decision to bring one of its two “HQ2” corporate offices to the Queens neighborhood of Long Island City.


brick-and-mortar retail location near Herald Square in Manhattan for roughly half an hour starting about 12:30 p.m. Dozens of protesters, many carrying signs and cardboard boxes similar to Amazon’s packaging, gave speeches and chanted slogans including “Not a penny to Amazon” inside the store before continuing the protest outside on the sidewalk.

Community groups plan to stage a second, larger rally Monday evening in Long Island City’s Court Square Park, just blocks away from where Amazon’s HQ2 is set to be built. More than 3,000 people said on Facebook


that they’re interested in attending the later event, which will include a march followed by a rally.

The two events were organized by roughly two dozen community groups, including local unions and nonprofits that work on behalf of immigrants. And the timing of the events was no coincidence — organizers said they hoped that by holding the protests during Cyber Monday they could better educate the public on what they see as the potentially harmful effects of Amazon HQ2 and garner greater interest from local and state politicians.

Read more: What Amazon’s HQ2 will mean for house prices

“Cyber Monday is a big day for Amazon, and Amazon coming to Queens is a big deal for New Yorkers,” Charles Khan, an organizer with the Strong Economy Coalition and the Center for Popular Democracy, told MarketWatch following the Herald Square protest. “It’s a trillion-dollar company run by the richest man in the world, and they don’t need any help from taxpayers to come to New York.”

Many of the protesters said they were worried about the effects that Amazon’s corporate offices in Long Island City could have on affordable housing in Queens. In particular, some fear that the relatively low housing prices in nearby neighborhoods such as Woodside and Jackson Heights could attract Amazon’s new employees and lead to gentrification and rent increases.

Organizers said they’re concerned in particular about the large population of newly-arrived low-income immigrants in Queens — they fear they could be pushed out by newer, wealthier residents. Researchers have estimated that Amazon’s HQ2 could push as many as 800 people into homelessness in New York City and Northern Virginia. (Amazon did not respond to a request for comment.)

“We are committed to blocking this deal,” said Deborah Axt, co-executive director of Make the Road New York, a nonprofit that promotes community building and policies that benefit immigrant and working-class residents. “We have no interest in re-living what they’re experiencing in Seattle.”

Additionally, activists expressed concern regarding the $3 billion-plus in subsidies that New York state and city officials have promised to Amazon in order to lure it to New York. Arguments from lawmakers that Amazon HQ2 will grow the state’s tax revenue did not sway many, including Maritza Silva-Farrell, executive director at ALIGN, a nonprofit focused on workers’ rights and economic equality. “This is like the traditional trickle-down economics that we know doesn’t work,” she said. “These are subsidies people would prefer to be used for education and transportation.”

3 Charts That Suggest Timber and Forestry Stocks Are Headed Lower

Alphabet A Falls 3% By Investing.com

AT&T CFO cautions on how quickly 5G revenue will come By...