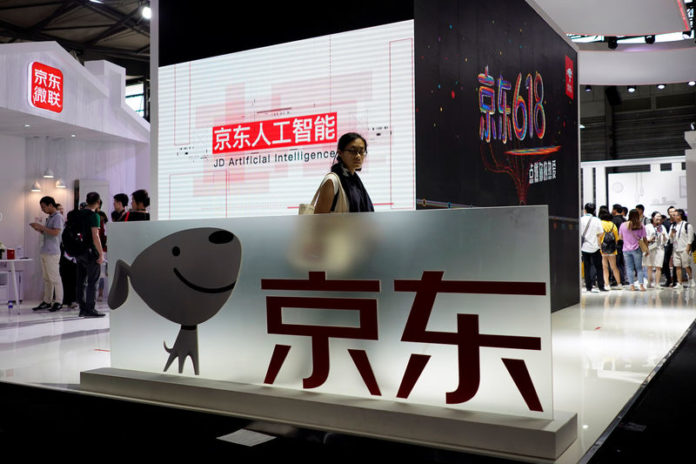 (Reuters) – China’s JD.com Inc reported third-quarter revenue on Monday that fell short of analysts’ estimates on sluggish sales in its core e-commerce business. Revenue was 104.8 billion yuan ($15.09 billion) for the quarter ended Sept. 30, compared with an average estimate of 106.2 billion yuan from 22 analysts, according to IBES data from Refinitiv.

JD.com’s sales volumes are seasonally lower in the third quarter as it ramps up to its November Singles’ Day promotion period. This year, it sold 158.9 billion yuan in goods during the month-long event, up 17 percent form a year earlier.

JD.com, backed by Walmart (NYSE:) Inc, Alphabet (NASDAQ:) Inc’s Google and China’s Tencent Holdings, has recently been in news for the arrest of its chief executive officer, Richard Liu, over allegations of sexual misconduct in the United States.

He was released after a night in jail and JD.com has said the accusation against Liu was unsubstantiated.

The firm did not make any further comment on the issue in what is its first quarterly results since the arrest.

Net income for the quarter was $418.9 million, or 30 cents per American depositary share.

Concerns of weakening growth momentum have pushed down JD.com shares by more than 44 percent this year. Shares of its bigger rival Alibaba (NYSE:) Group Holding have shed 11 percent.

Both firms are making efforts to reach new consumers in Southeast Asia and rural China as demand tapers off in big cities. Earlier this month, Alibaba lowered its forecast for full-year sales, citing economic uncertainty linked to the trade war.

JD.com has said it will move its warehouse business into a separate unit, offering logistics management to third-party brands as well as its own platform, in a bid to boost income.

Merkel jams spanner into EU reform, but some see acceleration ahead By Reuters

Pay awards by UK firms set to stagnate in 2019: XpertHR By Reuters

What to Do When Stocks Tank: Dalio, Buffett

Diwali dhamaka! Amazon offers free shipping on all orders for the...

Erdogan says Turkey open to investment, but has not asked any...

They, them, theirs? The push for going gender-neutral in the workplace