Home Finance China yuan to crack 7 per dollar in six months on weak... 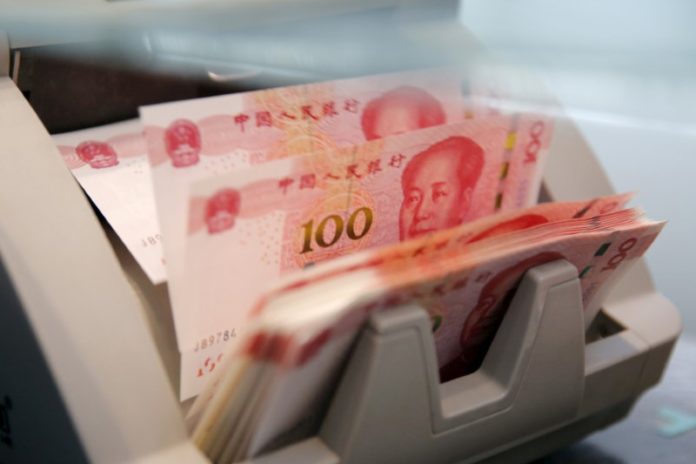 © Reuters. FILE PHOTO: Chinese 100 yuan banknotes in a counting machine while a clerk counts them at a branch of a commercial bank in Beijing

BENGALURU (Reuters) – China’s yuan will breach the 7 per dollar rate within the next six months, according to about 60 percent of FX strategists polled by Reuters, who also said authorities would continue to exert control over the currency in 2019.

Having weakened over 5 percent this year, the yuan hit a 2-1/2 month high of 6.8308 on Tuesday after Washington and Beijing agreed last weekend to a 90-day ceasefire in a trade war which has rattled financial markets for months now.

But uncertainty around any resolution to the trade conflict before that deadline expires has already increased.

In addition, a weak economic growth outlook and more policy easing by the People’s Bank of China (PBOC) will exert pressure on the yuan, erasing the 1 percent gains made this week.

“The positive market reaction to a temporary truce could be short-lived as the potential for a further escalation remains,” said Nick Bennenbroek, currency strategist at Wells Fargo (NYSE:), the most accurate forecaster for Asian currencies last year according to Thomson Reuters StarMine calculations.

“With growth slowing and more policy easing likely to come from the Chinese authorities, it seems likely, in our view, that the renminbi will continue to weaken for now.”

Seventeen of 28 strategists who answered an additional question said the yuan would breach 7 per dollar within the next six months and four said within a year. Only three said more than a year.

The remaining four respondents said the partially-floating currency would never break that threshold – not reached since the global financial crisis – on expectations the Chinese authorities will always step in to defend it at that key rate.

“I don’t think the renminbi will weaken significantly as we are optimistic about a China-U.S. trade deal next year,” said Serena Zhou, China economist at Mizuho Securities, who does not expect the yuan to breach 7 per dollar.

The latest six-month consensus for the yuan at 6.98 per dollar will be the weakest expectation for any polling period since a survey in July 2017.

Reflecting the divide among forecasters on how the U.S.-China trade war pans out, 14 of 37 common contributors from last month revised their forecasts to show a stronger yuan. Sixteen downgraded their outlook and seven left it unchanged.

But the range of forecasts suggests a weaker yuan. The most pessimistic call was for it to weaken to 7.85 per dollar in a year, the weakest view ever in about eight years of Reuters polls on the yuan, and a rate not reached in a dozen years.

That negative call was driven by worries over increased capital outflows and lower foreign exchange reserves as Chinese authorities are slowly stepping up interventions after the yuan approached the 7 rate.

But strategists were evenly divided on another hotly-debated subject.

“There will be no formal implementation of outright capital controls. However, if necessary, temporary measures which reduce capital flow pressure may be implemented,” said Maximillian Lin, EM Asia strategist at NatWest Markets.

Unlike other major currencies, the PBOC tightly controls the , setting a mid-point rate every day from which the renminbi is allowed to only move 2 percent up or down.

In response to an additional question, 15 of 26 respondents said the Chinese authorities will continue to control it next year. The remaining 11 said they would allow the renminbi to float freely.

“The PBOC will likely continue intervening in the currency market to keep volatility in check. It will likely use both the fixing rate and dollar selling,” said Amy Yuan Zhuang, chief Asia analyst at Nordea.

“However, interventions will be less aggressive in order to keep the gunpowder dry for the long haul and to prevent a tightening of liquidity that could rupture the large credit bubble.”

Market timers are on the sidelines, which means you might want to jump in

ED issues notice to NDTV for FEMA violations amounting to over Rs 4,000-cr

no reason to expect Italy to lose market access By Reuters

India plays a critical role for Prysm in both R&D and sales: GB Kumar,...

Artificial intelligence is revolutionizing the workplace, but it’s also dominated by...